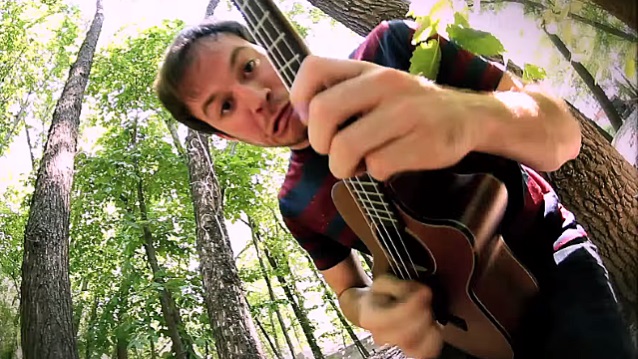 Chicago-based guitarist Rob Scallon, who became an Internet sensation in May when he released a video for his ukulele cover version of SLAYER's "War Ensemble", has returned with yet another unconventional rendition of an extreme-metal song, this time with his ukulele take on "Frantic Disembowelment" by CANNIBAL CORPSE. Check it out below.

According to CleartoneStrings.com, Scallon garnered attention from news outlets and music companies across the globe, including Kala Brand Music, which gifted him with an endorsement and a new U-Bass and ukulele. Kala endorsed Scallon after noticing he was playing one of their soprano ukuleles in his viral video. He told Ukulele magazine: "Kala contacted me after the video started really gaining traction to set up an artist relationship. I'll be proudly sporting more of their instruments soon." He also has a working relationship with Guitar-Pro tablature software, and is now signed to DFTBA Records, a YouTube-popular record label owned by vlogbrother Hank Green.