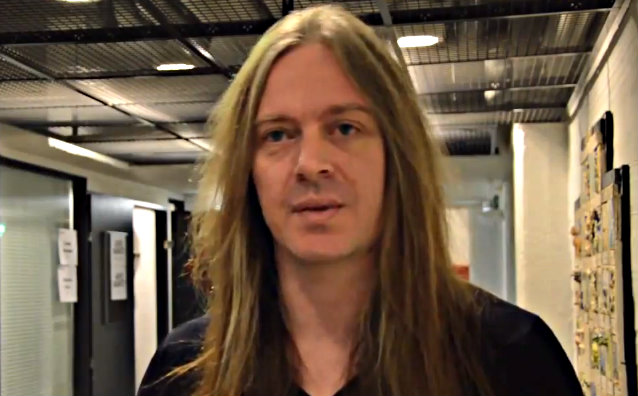 Niclas Müller-Hansen of Sweden's Metalshrine recently conducted an interview with guitarist Bill Steer of reactivated British extreme metal pioneers CARCASS. A couple of excerpts from the chat follow below.

Metalshrine: The album "Surgical Steel" has been out for a couple of months and you've had time to reflect on it. Do you feel that it came out exactly the way you wanted it to?

Bill: Not exactly, because they never do. I'd say we are reasonably happy with it because we spent a fair amount of time on the whole thing, looking on the whole process from the beginning of the writing thing to completing the mixing. We worked hard. Once I had a bit of distance from the thing and didn't listen to it for a while, I actually started to enjoy it.

Metalshrine: Working yet again with [producer] Colin Richardson, was that the way it was supposed to be?

Bill: That's what we felt at the time, but by the end of it, it felt a bit different. We love the guy, but you can't deny that times have changed. We were trying to have as many elements of the past as possible, so Colin was the natural guy. He's been on all but one of our albums and there's still the same camaraderie, but in terms of how he works and how we work, it's like a fork in the road. His taste in music… I think it says a lot that he stopped working on our album to work with TRIVIUM. It's a taste thing and he clearly thinks that that band is more significant metal than our band. We're biased so we disagree. [laughs] Nothing against TRIVIUM, because they're nice people. In our minds, it was a strange choice, but in Colin's world, it makes all the sense.

Metalshrine: Do you think it was a necessity to keep that old CARCASS feeling to it?

Bill: Yeah, at first that really felt like the way to go, and there were definitely beneficial aspects to it, because some of the Colin kind of qualities did shine through. He's very good at certain things, usually just sonic things and very small details. He's not as concerned with a player's performance, it's more the sound he's making. He can be incredibly precise, like if somebody's doing a solo and it's not quite in that position, he'll just stop recording it, even though he could be wailing and playing beautifully, it doesn't matter. He's missing some sound, which most of the time is really useful. I think he spent a lot of time working with bands that work on the grid, so that's the real issue. He was losing patience with us because we did everything naturally. Our drummer did not play with a click, so everything we played had to be done from start to finish. I think he liked it at first, because he hadn't done it for so many years, but towards the end of the recording sessions, you could tell he was really annoyed. Luckily for us, Andy [Sneap] came in and rescued us on the mix.

Metalshrine: Are you already now thinking about the next album, even though this one is fairly new?

Bill: Yeah. There's a mutual agreement between us that we'd like to do one. There's an awareness that if we can get through the next seven months of touring and festivals and still like each other and feel good about this, we definitely want to do a record. There's loads of lessons we learnt on this one and while I've still got it fresh in my head, I want to build on that. It's fun, but it's a really challenging thing to do because I haven't done anything creatively in this genre of music for so long, but it suddenly felt very fresh. I had escaped it because it was too limited in my mind and after a few years of doing other styles of music, I found there were new limitations with that and I wanted to go back and do extreme music again. [laughs] You can never be 100% happy, but right now this is what I like doing. As I said, it's a challenge and probably more so now than ever, because it's hard to be innovative in this music. There's a lot of incredible players out there. Especially the American guys, they're treating it like a sport and the drummers especially and you have to admire the dedication and tenacity, but I also think this music has to have a little bit of soul and maybe some swing.

Metalshrine: Since you're on tour with HELL now and I guess you see Andy [Sneap] every day, would he be a potential producer for the next album?

Bill: Yes, no question about it! His work ethic on the mix was incredible. After three months of frustration waiting for something to emerge from Colin, as soon as he turned it over to Andy, we were hearing great results. It's a fresh set of ears and I'm not gonna blame Colin for that aspect, because he felt very burnt out. It was just our thing. In between blocks of our recording, he was taking on other jobs and doing those things. He was just exhausted. As I said earlier, the TRIVIUM gig, for him, was very important. That's one of his favorite groups to work with and they're a lot easier to work with than us. I wouldn't pretend otherwise. We're awkward, because we're old-fashioned. We haven't grown up with this digital stuff and we just wanna act like we use a two-inch tape machine. [laughs]