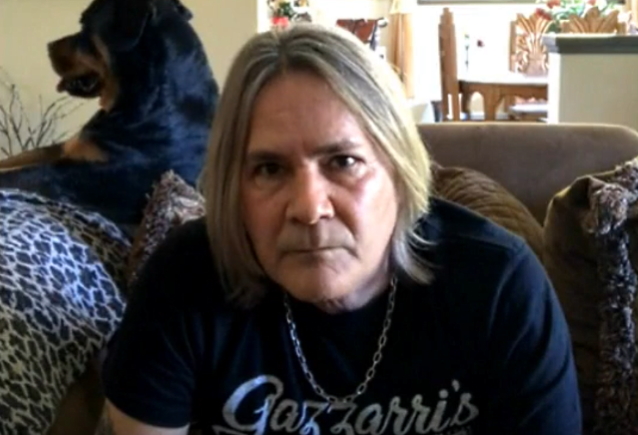 CARLOS CAVAZO On QUIET RIOT Continuing Without Any Members Of Classic Lineup: 'I Think It's Stupid For Somebody To Do That'

Former QUIET RIOT guitarist Carlos Cavazo says that "it's stupid" for the band to continue without drummer Frankie Banali.

Banali, who joined QUIET RIOT in 1982 and played on its breakthrough album, 1983's "Metal Health", died last August after a 16-month battle with pancreatic cancer. In September, QUIET RIOT announced that it would carry on touring following Frankie's death. The band, which now features drummer Johnny Kelly (DANZIG, TYPE O NEGATIVE),played a couple of shows in October and has a string of dates booked in 2021.

Asked in a new interview with the "Waste Some Time With Jason Green" video podcast how he feels about QUIET RIOT continuing without any members of the group's classic lineup, Carlos said (see video below): "I think it's stupid for somebody to do that, really. It doesn't make sense to me."

Cavazo was a member of QUIET RIOT during the band's most commercially successful period. After replacing Randy Rhoads in the 1980s, he remained in QUIET RIOT into the early 2000s until the group split up. When vocalist Kevin DuBrow reformed QUIET RIOT in 2003, Cavazo was not included.

Asked if he would have returned to QUIET RIOT had he been approached to come back nearly two decades ago, he said: "If we could have worked out our differences and all the details of everything, I would have done it, yeah. I would have loved to get back with the original QUIET RIOT. But it was never to be. Unfortunately, Frankie kind of screwed me over a little bit here and there, and he never tried to call me and say he was sorry for what he did and make up our friendship. He was okay — he could sleep every night for what he did. It wasn't cool what he did, and it wasn't what friends do to friends. Obviously, he wasn't my friend. Friends don't do that to friends, and I figured, I just scratched him off my friends list. I just didn't wanna have anything to do with any of them, and I just moved on."

Banali revived QUIET RIOT in 2010, three years after DuBrow's death, along with veteran bassist Chuck Wright, who played on several of the tracks on "Metal Health", and guitarist Alex Grossi. The band recruited new lead vocalist Jizzy Pearl, of LOVE/HATE, L.A. GUNS, ADLER'S APPETITE and RATT, in 2013, before replacing him in 2016 with Seann Nicols (a.k.a. Sheldon Tarsha),and in 2017 with James Durbin. In September 2019, QUIET RIOT parted ways with Durbin and replaced him with a returning Pearl.

According to Carlos, he never had an interest in reuniting with QUIET RIOT after DuBrow's death. "I couldn't see [us] doing it without him myself," he said. "His vocal was so identifiable with the QUIET RIOT sound, to have somebody else singing, it just didn't make sense to me. I would only do it with the original band."

Banali discussed his relationship with Cavazo in a 2017 interview with Myglobalmind. He stated at the time: "My relationship with Carlos is completely the opposite of what it is with [former QUIET RIOT bassist] Rudy Sarzo. I have known Rudy since he was nineteen and I was eighteen. We are beyond friends; we are brothers. When it comes to Carlos, we never had much of a relationship — not because we didn't like each other, but we have such completely diametrically opposed interests. We didn't have any of the same friends either. We were never that close, and as time has gone on, that gap has widened to the point there isn't that much of a relationship. It's sad, because I think Carlos is one of the best guitarists in rock. He is ridiculously underrated and it's a shame we experienced such great things with QUIET RIOT yet we have nothing to talk about."

Banali told "Eddie Trunk Live" in a 2015 interview that he didn't think Carlos was "very supportive about a QUIET RIOT that doesn't include him, by his own choice, and the QUIET RIOT that continues. I don't take it personal," he said. "I mean, I wish him the best, and I think he's great."

The drummer added that that "[Carlos] distanced himself from QUIET RIOT a long time ago." He explained: "You have to remember, the last time that both Rudy and Carlos were in QUIET RIOT was in 2003. And then Kevin did something for about a year, and when Kevin called me up and he wanted to do QUIET RIOT again, the stipulation was, from Kevin's point of view, was he did not want Rudy to be involved, because, for whatever reason, he has issues, or had issues, with Rudy. And I said, 'I think it might be a good idea to have Carlos involved,' because, you know, he's one of the three 'Metal Health' guys. And [Kevin] said to me, 'I'll leave that up to you.' And I went to Carlos, and he was not interested. His excuse was that he was not gonna do it unless Rudy did it, fully knowing that there was no way that Kevin would do it if Rudy was involved. So he shut himself out in 2003."

According to Frankie, he didn't see Carlos again for nearly a decade until a chance encounter at the M3 Rock Festival in Maryland.

"The amazing thing about it is that I've had no communication with Carlos whatsoever from 2003 up to that point," Banali said. "And when I saw him [at M3 in 2012], it was all smiles, and it was great, and I was happy to see him, and he seemed to be happy to see me. But, I think, when the door closes and he goes into one corner and I go into another one, it is what it is."