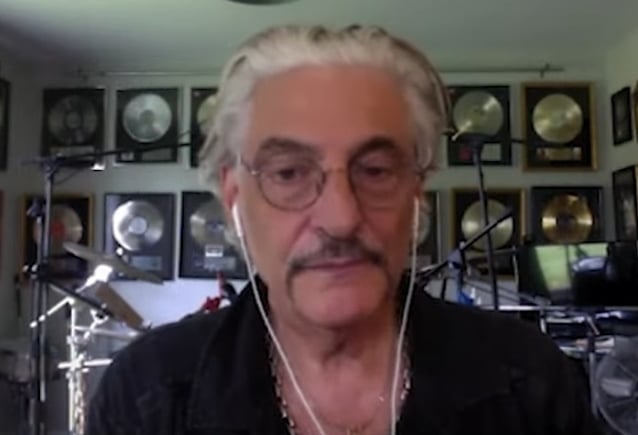 During an appearance on acclaimed guitarist Joe Bonamassa's hit interview series "Live From Nerdville", legendary rock drummer Carmine Appice spoke about the fact that many artists are facing severe financial struggles as they rely on touring to gain a following and who barely make any money from streaming music services. He said (as transcribed by BLABBERMOUTH.NET): "Today, it's very difficult [for musicians to make a living]. Take the zeroes off. I mean, I sold my rights to 'Sexy' [one of Rod Stewart's biggest hits, 'Do Ya Think I'm Sexy'] back to Warner Brothers, because there were no mechanicals. [Editor's note: Mechanical royalties are royalties that are generated each time a musical composition is reproduced, whether physically or digitally via on-demand streaming or download-to-own services.] Mechanicals, when people buy a record, there were no mechanicals anymore. And that was a huge record. But I kept ASCAP.

"I've been watching my money since I moved to California in 1975," he continued. "Because when I moved there, and all the three bands I was in, I walked out and I said, 'This is all the money I have?' 25 percent [goes] to the manager, five percent to this guy, 10 percent to the agent. And pay your bills. By the time the band ends up with something, you've got 10 dollars to split. Today it's hard to even make any money. The only way you can make money is, if you have a band, play gigs, build a following, but keep your eye on the expenses. And now it's really hard with these gas prices and everything. We just budgeted all the CACTUS thing we're doing, but now the gas prices are, like, double since we did the budget. So who knows what we're gonna end up with.

"It's very difficult today," the 75-year-old Appice, who current resides in Florida, repeated. "But all I can say is keep your eye on the money. I've done other things in my life. I wrote the drum book. That did well. Just stuff that came out that I did. I dabble in real estate. But, knock on wood, I had accountants and people watch over me, and I had a corporation, so I set myself up. But a lot of guys don't. I mean, even guys in bands that I played with. And I've been lucky I played with all these different bands that made money. Today it's very difficult to play… Unless you're in a huge band like FOO FIGHTERS that go out on the road and make all the money, 'cause the record business is really… There is no record business anymore. I was thinking about that yesterday. I said, 'How do these record companies make any money?' Spotify pays nothing. Maybe if you get some people [buying music] on iTunes, downloads, that still makes a little money. There's no CD sales anymore. Maybe some album sales. So how does a record company make any money? That's why they're not giving out any money [as recording advances].

"I [sold] my [rights to] 'Sexy' and 'Young Turks' back to the company because there's no money being made there. But I kept ASCAP. And ASCAP actually still makes money. But what I did, I took my money and I bought some real estate with it. And that real estate is generating more income than the actual song was in mechanicals.

"You've gotta use your head," Carmine added. "There's a lot of guys, musicians, who don't have a clue about finance and how it works and money. I was lucky, a manager I had, a Mafia guy, he always told me, 'Buy real estate. People gotta live somewhere. Buy real estate.' He owned so many real estate properties in New York… You need somebody to mentor you in this when you're a musician, 'cause if you don't, you don't have a clue."