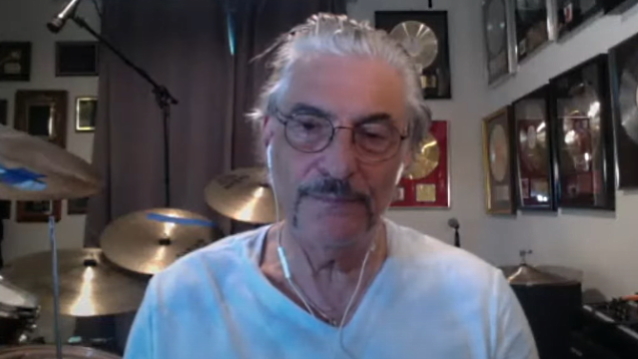 Legendary drummer Carmine Appice, who worked as Rod Stewart's kit-man in the 1970s and 1980s, co-writing Stewart hits "Young Turks" and "Da Ya Think I'm Sexy", spoke to the "Music Biz Weekly Podcast" about his decision to sell his songwriter share of some of his most popular songs. He said (as transcribed by BLABBERMOUTH.NET): "There's no money in songwriting anymore. There's no money in selling records. I've got all these gold records on the wall; nobody gets those anymore. And that's how you make money.

"The reason why I sold my songs was because there's no more royalties; they're very little. Because everything went to streaming, and streaming destroyed the music business, as far as I'm concerned. I won't even listen to Spotify or any of those things; I won't listen to 'em 'cause they're ripping the musicians off so bad. When you talk about young musicians, they have no chance — unless they somehow know how to get all these hits on YouTube. I don't know how to do that."

Later in the interview, Carmine reiterated his belief that he wouldn't know how to go about making money if he was starting out as a musician today. "I don't know how these bands come out and they get two million views on YouTube, or they get four hundred thousand people on Facebook and Instagram," he said. "I don't really know that stuff; I don't have a clue how to do that. So they probably know how to do that better than me. But still, when they do that, the only money [that] could be made from that is going out on tour and playing gigs and [selling] merchandise. Even if you don't have a bigger name, you open up for somebody, you do merchandise and you make some money. And you get big, and it's all about touring and merchandise. You get crappy money from Spotify. And the labels, they don't sell CDs anymore. They might sell a little vinyl, but there's no money in it."

Appice is the original drummer of VANILLA FUDGE, with whom he still records and performs today. He has also played with CACTUS and BECK, BOGERT & APPICE, in addition to spending stints in the bands of Ozzy Osbourne and Stewart. Carmine was named the 28th greatest drummer of all time by Rolling Stone magazine.