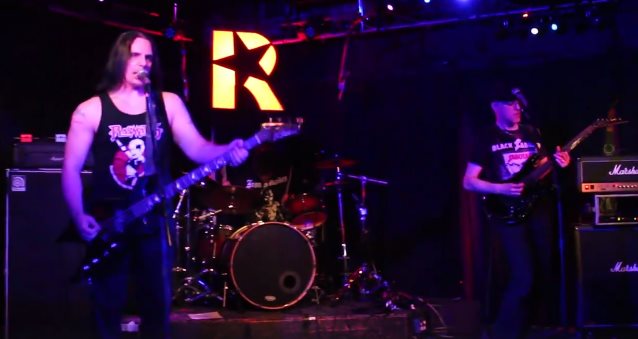 The Bowery Electric bash will mark this year's final, official celebration of the thirtieth anniversary of Peter Steele's thrash-core masterpiece "Retaliation", with provocative tracks, "Jesus Hitler" and "Race War" coming to life to join today's headlines, just as fresh and topical as the day they were first released in 1987. Official event DJ and longtime friend of CARNIVORE, Alex Kayne, will create an atmospheric audio-visual tribute to Peter Steele, the early beginnings of CARNIVORE at L'amour, and of the band's second rise to prominence during TYPE O NEGATIVE's golden run.

The show will include an after party with a VIP meet-and-greet available ($40),and feature Kayne spinning danceable heavy tracks by the likes of NINE INCH NAILS, ROB ZOMBIE, THE CULT, RAMMSTEIN, MINISTRY and more. A "Carnivorous Halloween Costume Contest" will take place, with meaty prizes like real live blood from each band member. Rare photographs and "Carnivorous artifacts" (such as Peter Steele's original handwritten CARNIVORE lyrics) will be displayed.

The classic "Retaliation" lineup of CARNIVORE is reforming as CARNIVORE A.D., out of great respect to Peter Steele's legacy while simultaneously distinguishing themselves from past incarnations of the band. Marc Piovanetti states: "Last May, I was very fortunate to perform CARNIVORE music live again for the very first time in over twenty years. The jubilant and humbling reception I received confirmed to me that Peter Steele is gone, but his epic legacy is not forgotten. So this Halloween the two remaining original members of CARNIVORE, myself and Louie Beato, will open up the next chapter in the band's ever evolving history. We will introduce the mighty Baron Misuraca, who's stature and beastly growls have already awakened Peter Steele fans across the globe. A new official lineup of CARNIVORE will be introduced: CARNIVORE A.D., a CARNIVORE for the 21st century. Everyone is invited to join us in this celebration, and to mark the thirtieth anniversary of CARNIVORE's final LP, 'Retaliation'. I am also very pleased to have the honor of presenting this distinguished performance of Peter and Keith's music to their own friends and family members here in the greatest city in the world, at New York's Bowery Electric club. The 'Carnivorous Negative family scene' is finally whole once again, and I can't wait to see what the future brings."

Right now, Marc Piovanetti is also personally auctioning his legendary CARNIVORE guitar, hand-painted by Peter Steele for the band's infamous 1995 "Soviet Invasion" show at NYC's Limelight club. This guitar was used to record every single guitar track on "Retaliation" and was a mainstay at classic CARNIVORE shows between 1986-1996. Any bid above $10,000 will additionally garner Steele's original, handwritten lyrics to "Inner Conflict", and a private guitar lesson.

Otherwise, Marc is currently busy with his new band, CIRCUS OF STEELE — an all-original group formed in tribute to his fallen ex-bandmate and lifelong mentor, Lord Petrus Steele. CIRCUS OF STEELE are currently promoting their new single, "The Downfall", which cracked the "Metal Contraband" Top 50 radio charts. The single can be found on the band's upcoming six-track EP, titled "The Zombies Rise", which will hit iTunes this fall, after the band's first-ever mainstage appearance, opening up for SACRED REICH at New York City's premier metal venue, the Gramercy Theater. The band is current negotiating a record deal. 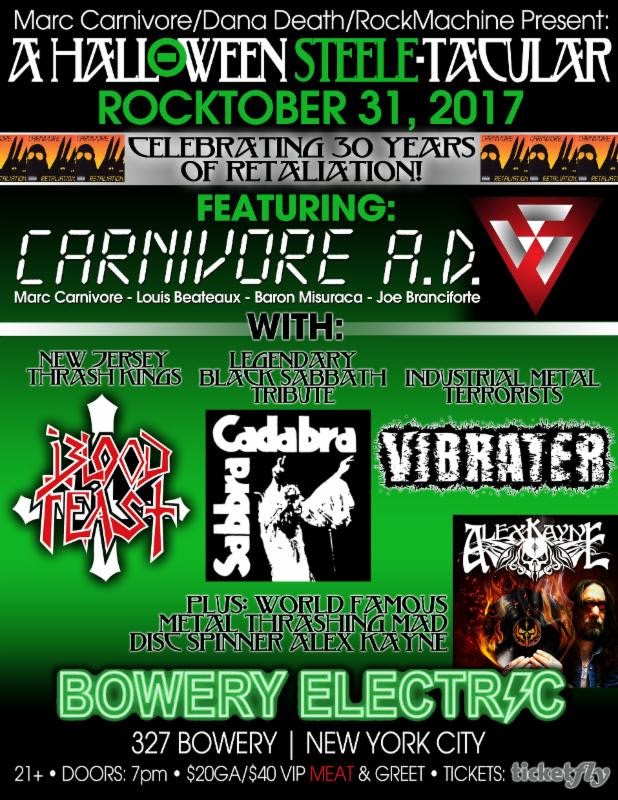