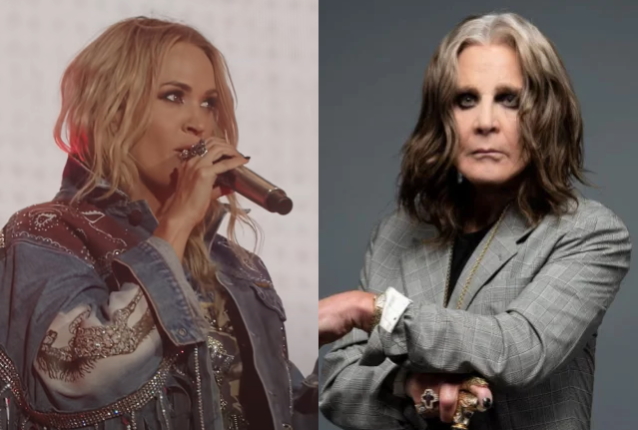 Underwood's country-tinged rendition of the track was recorded at Apple's Nashville studio and was accompanied by a take on her 2022 single "Ghost Story" along with her 2012 hit "Blown Away".

In a press statement, Carrie said about her decision to tackle "Mama, I'm Comin' Home": "I have always been an Ozzy Osbourne fan and 'Mama, I'm Coming Home' is one of my all-time favorite songs. I've always thought it felt a lot like a country song, and I've wanted to cover it for a long time. This was a really fun opportunity for me to be able to finally make that happen. I hope we've done Ozzy proud and I hope he likes it."

Two weeks ago, Underwood joined GUNS N' ROSES on stage during the band's concert at London, England's Tottenham Hotspur Stadium. Underwood made a surprise appearance toward the end of GUNS N' ROSES' main set, performing "Sweet Child O' Mine" with Axl Rose and his bandmates. She later returned to the stage during the encore to sing "Paradise City".

This past April, Rose joined Underwood on stage at the Stagecoach country music festival in Indio, California to perform the same two songs. At the time, Carrie called the collaboration "the greatest night of my life."

She also said that if you scrolled through her iPod, you'd find some really hard rock music, like MUDVAYNE.