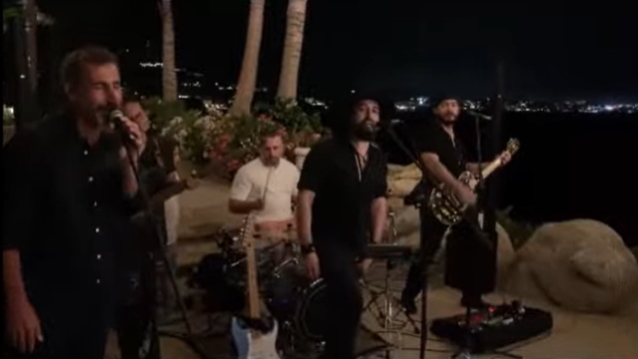 Serj Tankian and John Dolmayan of SYSTEM OF A DOWN played the band's song "Aerials" with the rock covers outfit MÉDIUM this past Friday, July 15 during John's 50th-birthday celebration in the streets of San José del Cabo, Mexico. Video of the performance can be seen below.

Dolmayan is married to Diana Dolmayan, who is the sister of Tankian's wife Angela, making them brothers-in-law.

On his social media accounts, John is very politically active like his bandmates, but unlike some of the members of SYSTEM OF A DOWN, particularly Tankian, Dolmayan supported Donald Trump's presidency.

In an October 2020 interview with Forbes, Serj admitted that he found it "frustrating" to see John so publicly supporting Donald Trump.

"He's Armenian. He's my brother-in-law and my drummer. Is it frustrating being politically opposite to your own drummer and brother-in-law? Fuck yeah," he said. "Of course it's frustrating. But that's having to do with American politics. When it comes to Armenian issues, we're on the same exact page."

Four months earlier, Serj reassured fans that, despite their differing beliefs when it comes to Trump, he both loves and respects John "irrespective of our extremely polarized political commentary.

"Remember irrespective of the stance, only artists that truly care and are impassioned will risk alienating their base for what they consider the truth," he added. "Our dilemma and possible fallacy is that we have two in one band. Some may consider that a weakness but the artistic, political and social dichotomy if not quadrichotomy has made SYSTEM OF A DOWN what it is today."

That same month, John stated about the discussions he has had with the other members of SYSTEM OF A DOWN: "You'd be surprised at how civil our conversations are, especially between me and Serj, who seem to have the most diverging opinions on things.

"I have a lot of respect for Serj and his opinions, although I don't agree with them very often these days. And that's okay. We expand each other's horizons. I like to think that he learns from me and I learn from him."