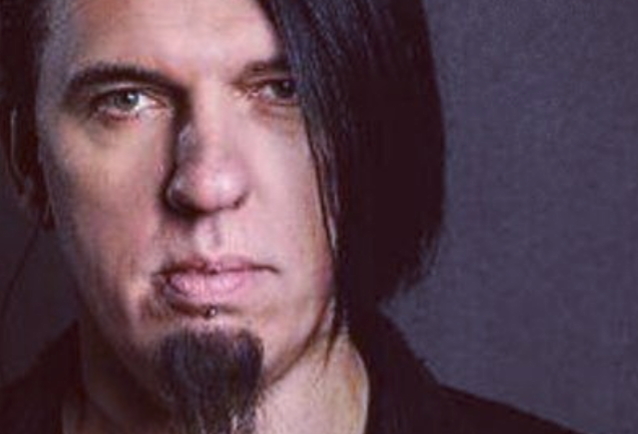 CASEY GRILLO: How I Got The QUEENSRŸCHE Gig

Casey Grillo spoke to "Breaking Absolutes" host Peter Orullian about how he ended up getting the gig in QUEENSRŸCHE as the replacement for the band's original drummer Scott Rockenfield.

For the past four years, Grillo has been filling in for Rockenfield, who stepped away from QUEENSRŸCHE's touring activities in early 2017 to spend time with his young son.

Asked how his working relationship with QUEENSRŸCHE came about, Casey said (as transcribed by BLABBERMOUTH.NET): "I was on my wife and I's 20-year anniversary on a boat; we were on a cruise ship. And we got married at a fun time of the year, which is spring break down here in Florida. So, March 16th is our anniversary, and we were, like, 'Let's go on a cruise ship.' … All of a sudden I get this phone call. And I'm, like, 'Wow, my phone's actually working,' 'cause we were kind of alongside Florida, so it wasn't too far off shore. And it's Todd La Torre, the singer from QUEENSRŸCHE. And he's, like, 'Hey, I've gotta talk to you.' I go, 'Man, I'm at sea right now. This is probably, like, eight dollars a minute.' He's, like, 'Go download Viber and call me back.' I didn't even get the Internet package. I was, like, 'I'm on vacation. I'm not gonna look at any business stuff. Nothing.' He goes, 'I'll pay for the Internet package. Just go get it.' I'm, like, 'Okay.' So I went and got Viber. I called him back, and I'm sitting there talking to him.

"My wife and I, we actually fell in love together listening to QUEENSRŸCHE," he continued. "QUEENSRŸCHE was kind of our music underneath the beginning of our relationship, when we started dating and stuff. So it was like our theme music behind us. The first show we ever went together to see was [QUEENSRŸCHE on the] 'Promised Land' [tour]. So we're huge fans. And I was a huge fan when I was a kid.

"So Todd's, like, 'There's a show that Scott can't do. His girlfriend's having a baby. Would you wanna do it?' I go, 'Yeah.' I go, 'When's the show?' And literally it was, like, eight days after I got off the cruise ship. [And I go], 'Dude I don't have any time to prepare for it.' And he's, like, 'Man, you can do this.' … He's, like, 'Download all these songs.' And there's stuff that I knew — the legacy stuff — but then there was all this stuff that I didn't know. So I'm, like, 'Wow, I'm gonna be working on this.' I told him on the phone, 'I don't think I can do this.' And the whole time my wife is kicking me under the table [laughs]: 'You're doing this.' So I listened to my wife, which I'm glad — she kicked me hard enough. And that's pretty much how it happened. And I went home. And eight days before I had to fly out, I was working eight, ten hours a day, and my wife was shoving food underneath the door of the studio: 'You stay out there until it's right.' And my first gig was on April Fool's Day 2017 in El Cajon, California."

Earlier this month, Rockenfield launched a cryptic new QUEENSRŸCHE-centric web site that implied he was plotting his return to the music scene. His latest social media activity came four months after he shot down suggestions that he quit QUEENSRŸCHE or retired from playing music. In January, the drummer shared an update on Facebook in which he said that fans "have not been given the facts by any means" and promised that he would offer more details at a later date.

A week after Rockenfield went live with his Queensryche2021.com web site, La Torre announced that he was selling one of four remaining pairs of drum sticks that were used by Scott during the drum recordings of the band's 2013 self-titled album. The following day, Rockenfield returned to his Facebook page to seemingly take a swipe at Todd over the move, writing: "As a corp brand business owner for over 40 years now, I was once asked: if an 'employee/hired hand/sub contractor/or other similar employed individual' is engaging in unacceptable and disparaging remarks towards their so called 'EMPLOYER or BENEFACTOR', then more than likely this person still needs to be educated and nurtured to gain some much needed experience and to hopefully then have some respect and gratitude".

The drum tracks on QUEENSRŸCHE's latest album, 2019's "The Verdict", were laid down by La Torre, who learned to play drums at an early age.

Almost a year after playing his first show with QUEENSRŸCHE, Casey announced his exit from his previous band KAMELOT in order to pursue "other musical endeavors" as well as tend to his "rapidly growing" drumhead company DrumStatic.