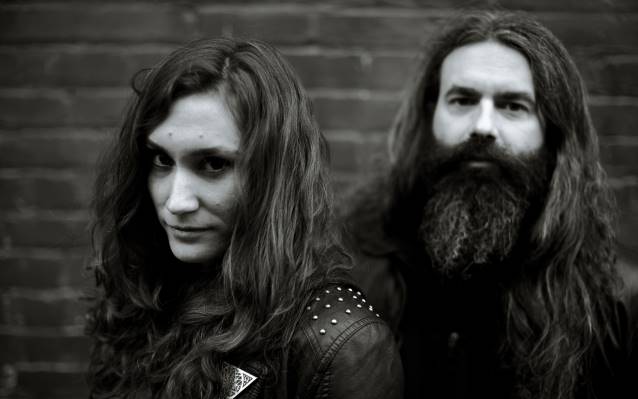 Following the successful release of their Prosthetic Records debut, "Blacklands", which earned the female-fronted doom trio a nomination for a Juno Award (Canada's Grammy equivalent) for "Metal/Hard Music Album of the Year," CASTLE will soon return to the studio to record a new album, with producer Billy Anderson (SLEEP, NEUROSIS) again overseeing the sessions.

Commented the band: "The next CASTLE record will be a culmination of the last two years of our life — a year and a half on the road in support of 'Blacklands' and the last six months holed up writing. The demos are done, the studio is booked and we were lucky enough to get Billy Anderson back to produce.

"The new record picks up where we left off with 'Blacklands' and, before that, 'In Witch Order'.

"There's a lot to sink your teeth into on the new record — killer riffs, big vocals — and if anything, it's about trying to harness the power that comes from playing night after night. It's going to sound huge and we can't wait to get it out."

The as-yet-untitled CD is expected to be released in the late spring.

CASTLE has also announced a Western European tour with U.K. doom group CONAN throughout April. Additional support will be added by Swedish rockers THE GRAVIATORS on select dates.

Since the release of "Blacklands" in 2012, CASTLE has toured extensively throughout North America and Europe, including appearances at Roadburn and Desertfest, in addition to playing alongside acts such as INTRONAUT, THE SWORD, DEMON LUNG and WITCH MOUNTAIN.

Originally conceived by guitarist, songwriter and producer Mat Davis as a solo project, CASTLE turned a meeting of hearts into the formation of a band. After meeting his wife Elizabeth Blackwell, who would become the group's vocalist and bassist, Davis also reached out to his longtime friend and musical collaborator Al McCartney from Toronto to play drums. The power trio released their debut album, "In Witch Order", via German label Van Records in 2011; it was revered by the press, including being named Metal Hammer Norway's "Album of the Year" in addition to leading the Roadburn festival to name the band "Newcomer of the Year." "Blacklands" earned similar acclaim, with Metal Hammer calling it "a tough alloy of purest classic metals — doom, thrash, epic and power — with dark, smoky lady vocals," and Exclaim! praising its "sinister sweetness" and "irresistible hooks."