CAULDRON To Play Toronto This Weekend

Toronto, Canada's CAULDRON has scheduled an all-ages show in the band's hometown on January 3 at The Black Swan Tavern (154 Danforth Ave.). Tickets are $10.00, doors open at 8:00 p.m. BATARDATOR and DEMON THRONE are also on the bill.

The high-energy traditional heavy metal three piece has built a steady following while producing a fresh heavy metal sound built out of a passion and love for the genre, and a deep understanding of the elements that go into making memorable straight-up metal music.

Having already issued the "Into The Cauldron" EP to underground acclaim, the band is currently putting the finishing touches on its first full-length, "Chained To The Nite", due for release in early 2009. The group's sound encompasses all the best elements of classic metal, with nods to old-school NWOBHM and a focus on stand out riffs and sung vocals.

Commenting on the band's new label home, CAULDRON vocalist/bassist Jason Decay says: "It's pretty alright. I always thought Earache was the best name for a record label, and as a kid I was actually a little disappointed when I found out that I didn't come up with it! But at least I get to be a part of it after all! It's also nice to be a part of a catalog that includes some of my favorite records, like CARCASS' 'Heartwork' and CATHEDRAL's 'Forest of Equilibrium'. I'm right into it!" 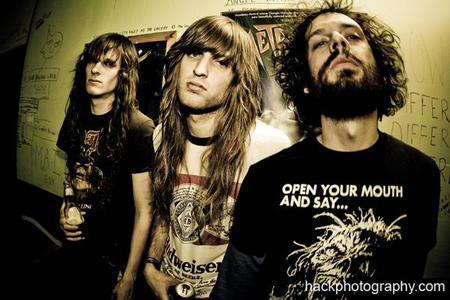