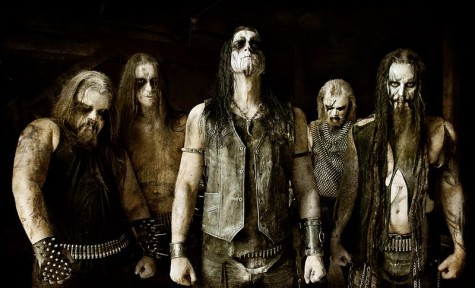 Finnish black metallers CAVUS have entered their own studio to begin recording their sophomore album for a fall release via Listenable Records. Songtitles set to appear on the follow-up to 2010's "Fester And Putrefy" include "The Art Of Blood Purging" and "Unholy Water".

"The band just purchased some rats and locusts to roam their premises to advance the vile surroundings of their studio," reads a press release from Listenable. "The old wooden building is condemned to be demolished in the near future so it will be the last album CAVUS records at that place they simply call The Lair."

Formed in 2008 in Porvoo, CAVUS "set out to pillage and desecrate everything in its path with a sinister blend of crushingly heavy, old-school black metal with baritone guitars and juggernautic basses along with raw-to-the-bone vocals that earned the group great recognition," according to a press release. "No keyboards, no fairies, no bullshit. This is straight-up rawness and CAVUS will spread like a virulent plague among legions worldwide."