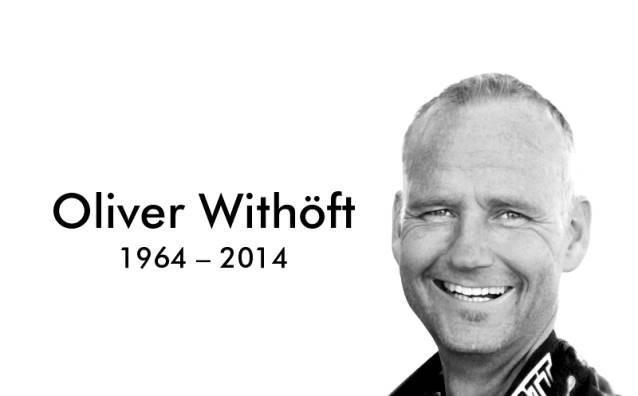 Oliver Withöft, co-owner of independent record label Century Media, passed away on January 20, 2014 after falling ill several months ago. He was 49.

Born in Dortmund, Germany in 1964, Oliver studied linguistics, business, and history in both Germany and the U.K.

Robert Kampf started Century Media Records 25 years ago simply to create a suitable label home for his own band, DESPAIR. He was looking for a trustworthy and strong partner to lead the company with and found this person in his best friend and fellow musician Oliver Withöft, who joined in eighteen months later, sharing the same love and passion for music and metal in particular. Since that very day, these two friends developed one of the most important independent record labels on the planet. Today the company has around 100 people on the payroll in Dortmund, London, Los Angeles, Berlin, Paris, Milan, Madrid, Melbourne, and the Netherlands.

A lot of musical careers were developed by Century Media over the years: LACUNA COIL, SHADOWS FALL, SUICIDE SILENCE, IN THIS MOMENT, OTHERWISE, ICED EARTH, DIE BROILERS, ARCH ENEMY and HEAVEN SHALL BURN are just a few of them.

Century Media became a brand name recognized across the world.

Oliver Withöft was always the strategic, legal and financial mind behind the organization. He was not only a strong fighter for the company, but also a very intelligent and forward-thinking leader.

When the music industry drastically changed in the '90s, Oliver was the first to think about new ways to adapt to the needs and challenges of the rapidly changing market.

Kampf: "I have lost my best friend of 32 years and my business partner of 24.

"Although the unthinkable already happened three days ago, I am still in a state of utter shock.

"Oliver Withöft leaves a space that cannot be filled for all who held him dear. He was a tremendous father, husband, son and friend and will be terribly missed. I will always treasure him in my heart as the witty, brilliant and altogether great person he was.

"Farewell, Oliver. See you on the other side and in our next life. Your brother, Robert."

Antje Lange, CEO of Century Media Records: "I learned a lot from [Oliver] in regards to business, the world and life. He was an extremely smart and visionary business man who cared a lot about the people working for him. He was one of the most open-minded and knowledgeable persons I have ever met.

"Oliver was responsible for a lot of successful artists' careers and an impressive amount of albums that had an impact in the music world. It has never been easy for him, but he was a strong fighter. A great man with an amazing sense of humor whose departure leaves a large gap in our lives."

Ula Gehret, who handles business affairs for Century Media Records with his company Clandestine, describes Oliver in the following way: "He had a razor-sharp intellect and keen business acumen, and as a number of people can attest to, he was not someone you wanted to be sitting across from at a negotiating table.

"After a few years at the label, he introduced me to how legal contracts worked. Eventually, with training, that became my full-time occupation.

"It is no exaggeration to say that without his tutelage and patience, I would not be where I am today, doing something I love, and with principle. He was my mentor."

Kobi Farhi (ORPHANED LAND): "Oliver was always a winner, one of those that I somehow thought would live forever. A genius, a friend and the best advisor I've ever had. It was all him behind the scenes."

Ola Lindgren (GRAVE): "Oliver and Robert had the guts, trust and belief to sign us when we were just a bunch of kids trying to play metal. Without these guys, I doubt we would be where we are today. He was not the easiest to work with back in the day, but a very cool guy."

For those who would like to honor Oliver's memory, his family has asked that instead of sending flowers they would appreciate it if you could donate to "The Oliver Withöft Scholarship", a fund raised as part of the Kindred Project.

Here is the reference: