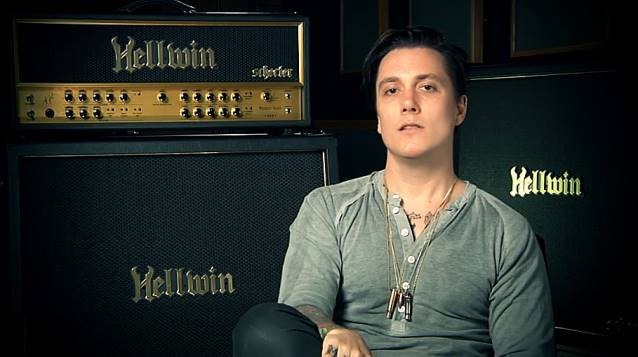 AVENGED SEVENFOLD's Synyster Gates recently sat down with Schecter Guitar TV to give an introduction to the Hellwin series of amplifiers — a collaboration between Gates and Schecter Amplification — and show what makes it different from your "everyday stack." Check out the footage below.

"As soon as we started building amps, working with Synyster on his own designs seemed like a natural step after the nearly 10-year relationship we have shared," said executive vice president Marc LaCorte.

"After years of trying to get all of the tone, playability and versatility I wanted in an amp, I turned to my friends at Schecter and legendary amp designer James Brown. Together we have created Hellwin, a line of amps engineered to sound and perform at the highest level whether you're on the big stage or in your garage," remarked Gates.

The first amp in the Hellwin series was the Hellwin USA 100, a custom-designed, all-tube model. Working in conjunction with renowned amplifier guru, James Brown, the AVENGED SEVENFOLD guitarist set out to design an amp that not only captured his unique tone, but also would prove to be an important asset to players of all styles in their studio and live work. The much-heralded guitarist worked every step of the way with Brown to create this truly remarkable amp. The entire Schecter Amplification team worked tirelessly, including company president Michael Ciravolo who states, "the Hellwin USA 100 design is the perfect start to our new Schecter Amplification division…. and observing Syn being there every step of the design process was key to the creation of this authentic line of amps."