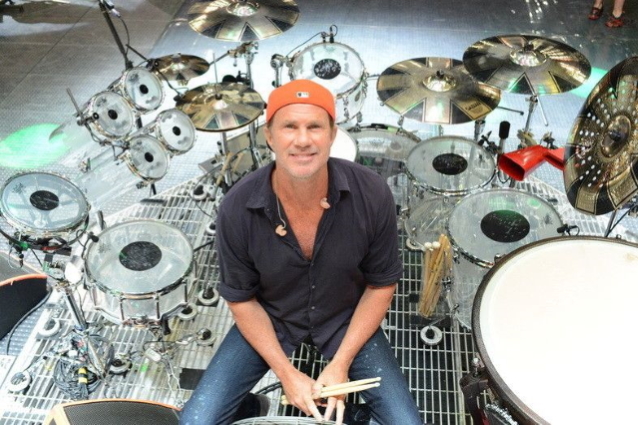 In a new interview with New York's Q104.3 radio station, RED HOT CHILI PEPPERS drummer Chad Smith was asked what fans can expect from the band in the coming months. He responded (as transcribed by BLABBERMOUTH.NET): "There's a gag order on me. I do so many Zooms [video interviews], and they're, like, 'Why'd you say that?'" He then went on to confirm that "there's something coming. I can say this: we're making a record, we're making new music, and it's very exciting," he said. "I don't know when it's coming out, but we can't wait for people to hear it, and we can't wait to perform for people. Just like everybody else that really misses that experience."

Smith's interview focused primarily on his upcoming stint as the featured guest artist and host of the Ad Art Show 2021. The virtual opening is May 3 at 4 p.m. EST on mvvoart.com during Frieze Week. Artworks by Smith will be exhibited on the monumental screens of the Oculus at Westfield World Trade Center the final weekend of the show (May 29-30).

Last October, RED HOT CHILI PEPPERS guitarist John Frusciante, who rejoined the band in December 2019, told the Australian digital radio station Double J that playing with his RHCP bandmates Anthony Kiedis, Flea and Smith once again was like "returning to family. I'm extremely comfortable with those people. It was as if no time had gone by at all when we started playing, pretty much, with a couple of minor exceptions, like how Chad and I gradually got our communication together in a new way. Basically, we're all just as comfortable with each other as we ever were, and it just felt like that right off the bat."

Frusciante rejoined RED HOT CHILI PEPPERS after the dismissal of Josh Klinghoffer, who had been in the band for 10 years.