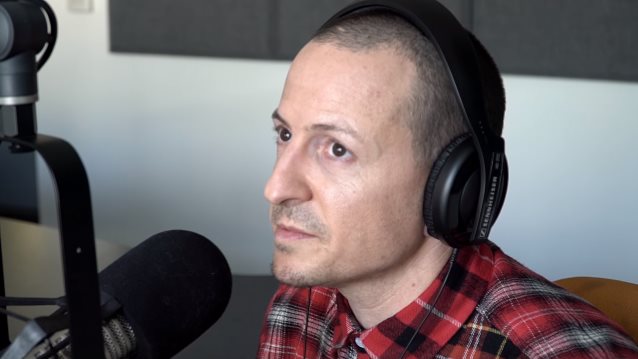 CHESTER BENNINGTON In February 2017 Interview: 'I Have A Hard Time With Life' (Video)

LINKIN PARK frontman Chester Bennington spoke about his complex battle with depression in a February 2017 interview — five months before he committed suicide.

The 41-year-old was found dead in his home in Palos Verdes near Los Angeles by one of his employees shortly before 9 a.m. on Thursday, July 20.

A Los Angeles County coroner said on Friday that Bennington's "death is confirmed to be suicide by hanging." He added that "a bottle of alcohol was found in the room, but it wasn't close to the body and was not full."

Bennington had been candid about mental health battles in numerous interviews over the years. He was an open book when it came to the darkness he wrestled with, from talking about depression, anxiety and substance abuse, to revealing that he was molested when he was seven years old.

Focusing on the topic of depression, it contained haunting lyrics, including: "I don't like my mind right now / Stacking up problems that are so unnecessary / Wish that I could slow things down."

In the chorus, he talked about how he was dragging around issues that were bringing him down before adding: "If I just let go, I'd be set free."

Speaking to JoJo Wright of iHeartRadio's 102.7 KIIS-FM in Los Angeles this past February, Bennington revealed the inspiration for the "Heavy" lyrics. He said (see video below): "I don't know if anybody out there can relate, but I have a hard time with life… sometimes. Sometimes it's great, but a lot of times for me, it's really hard. And no matter how I'm feeling, I always find myself struggling with certain patterns of behavior… I find myself stuck in the same thing that keeps repeating over and over again, and I'm just, like, 'How did I end up…? How am I in this?' And it's that moment where you're in it and then you can just separate yourself from that situation and you look at it and you see it for what it is and you're able to then do something about it; you've now broken out of that circle, that cycle.

"I know that for me, when I'm inside myself, when I'm in my own head, it gets… This place right here [points to his head], this skull between my ears, that is a bad neighborhood, and I should not be in there alone," he continued. "I can't be in there by myself. It's insane! It's crazy in here. This is a bad place for me to be by myself. And so when I'm in that, my whole life gets thrown off. If I'm in there, I don't say nice things to myself. There's another Chester in there that wants to take me down. And I find that, it could be… whether it's substances or whether it's behavior or whether it's depressive stuff, or whatever it is, if I'm not actively doing… getting out of myself and being with other people, like being a dad, being a husband, being a bandmate, being a friend, helping someone out… If I'm out of myself, I'm great. If I'm inside all the time, I'm horrible — I'm a mess. And so for me, that was kind of where the 'I don't like my mind right now / Stacking up problems that are so unnecessary…' That was where that came from for me."

Chester added: "I drive myself nuts actually thinking that all these are real problems. All the stuff that's going on [in my head] is actually just… I'm doing this to myself, regardless of whatever that thing is. So this is that conscious awareness of that thing. When you can step back and look at something, you're actually elevating yourself consciously — you're enlightened at that point, to a certain degree. And so this is that moment of enlightenment, where you go, 'I could do something about this, and by doing it, I can move forward and get unstuck from this, and I can actually…' For me, I can live with life on life's terms. I can experience the whole spectrum of humanity and not wanna get out of it, whether it's happiness, sadness or whatever. When I'm in it, I just wanna get out of however I'm feeling, no matter what it is."

Asked if he wrote the lyrics to "Heavy" while was in the "bad neighborhood" that he discussed earlier in the interview, Bennington said: "This time last year, I was a mess — a total wreck. I think for a lot of people, they think if you're successful, all of a sudden you get some card in the mail that says you're gonna be totally satisfied and happy for the rest of your life. It doesn't happen like that. Life, for me, happens the way it always [has]… The only difference is I'm in LINKIN PARK. What goes on inside my head has always been this way for me. So when I'm not working on that, my life gets messy. And that's kind of how the inspiration for all these songs came from — conversations about life and what was going on, as friends, as husbands, as fathers, as… whatever… business partners. We were all talking about what was going on in all aspects of our lives at certain times throughout the process of this record, and we realized, man, we've all gone through some really crazy stuff. And we don't need to find a source of inspiration — like, 'What's this record about?' This is our life. We always have written about our lives, and that should just be enough. We don't need to find some new thing. Life is always throwing these curveballs at you, whether they're good or bad — it just happens. And eventually, what I've found is, especially with the bad stuff, 'cause that's the stuff that sticks to me a little bit more, coming out at the other side and being, like, 'Man, I'm a better person because of that.' Or, 'I'm more compassionate because of that.' Or, 'I feel like I can understand people or humanity a little bit differently, 'cause I've been through some pretty crazy stuff.' And that's a positive. So finding a positive in all these things, that's what we always try to do, but we still talk about the feelings we had going through all these different circumstances."

Bennington's bandmate Mike Shinoda, who co-wrote "Heavy", previously revealed that Chester was really struggling on the day the song was written. He told Billboard: "I remember Chester walked in and it was, 'Hey, how are you doing today?' and he's like, 'Oh, I'm fine,' and we were hanging out for a minutes and he was, like, 'Y'know what? I have to be honest. I'm not fine. I'm not okay. Too much stuff is just happening to me. I just feel underwater.'"

He continued: "It was like that saying 'when it rains, it pours.' It's that kind of feeling that stuff is piling up one on top of the other, and it creates this feeling of just being overwhelmed, like, 'Things feel so heavy to me…'"

"Heavy" was the first single from LINKIN PARK's seventh studio album, "One More Light", which came out this past May.