CHILDREN OF BODOM keyboardist Janne Wirman is currently working on the fourth album from his WARMEN project, tentatively due later in the year. One of the new cover songs the band is working on is JANET JACKSON's "Black Cat", featuring a guest appearance by the Finnish pop/rock queen Jonna Kosonen. Other guest singers scheduled to appear on the CD include Alexi Laiho (CHILDREN OF BODOM) and Pasi Rantanen (ex-THUNDERSTONE).

Interviewed in January, WARMEN guitarist and Janne's brother Antti Wirman revealed that the album would be heavier than the band's previous output, with more aggressive guitar riffs. There will be just two instrumental tracks, and every song has a different singer. According to Antti, the next WARMEN album will be the group's strongest effort to date because it has "the best songs, best vocalists and the best sounds."

Kosonen, who was previously a member of the multiplatinum-selling Finnish female pop duo NYLON BEAT, had contributed her vocals to CHILDREN OF BODOM's cover version of the BRITNEY SPEARS smash "Oops, I Did It Again" (which appeared on the "In Your Face" single),and was also one of the guest musicians on "Accept the Fact". 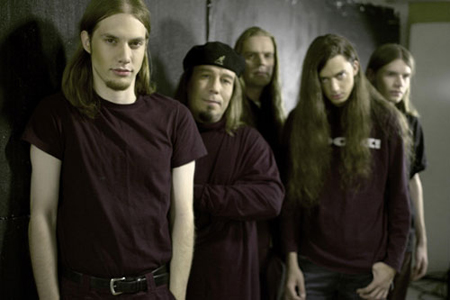