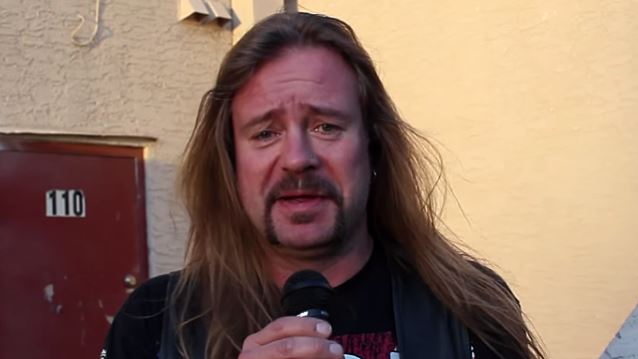 Finnish metallers CHILDREN OF BODOM have split with their guitarist of the past decade, Roope Latvala. The band says in a statement: "As we parted ways with no bad blood, we wish him nothing but the best and thank him for allowing us to share the last twelve years of our lives with him. [We] hope [the fans] know that this will not affect the upcoming shows or the new album as we recorded it as a four-piece and it is already mixed, mastered, heavy as shit and ready to go!"

Asked how he landed the gig with CHILDREN OF BODOM, Roope — who first made a name for himself shredding for the pioneering Finnish heavy metal band STONE — told Metal Storm in a 2012 interview: "Well, originally Alexi [Laiho, CHILDREN OF BODOM frontman] and I played in another band together called SINERGY. CHILDREN OF BODOM still had some touring and random gigs coming up when Alexander [Kuoppala] had left and we had decided that I just fill in for the tours. This was during the 'Hate Crew Deathroll' era. And then it just happened that there came more tours and then it was time to start recording a new album and it kinda just settled in; I somehow sneaked in. [Laughs]"

CHILDREN OF BODOM's new CD is due later in the year via Nuclear Blast.

The band's last studio effort, "Halo Of Blood", was certified gold in Finland for sales in excess of 10,000 copies. The album, which sold 8,400 copies in the United States in its first week of release, was made available in June 2013 in North America via Nuclear Blast. The cover art was created by Sami Saramäki, who was responsible for the artwork on previous CHILDREN OF BODOM albums "Follow The Reaper", "Are You Dead Yet?" and "Hate Crew Deathroll".