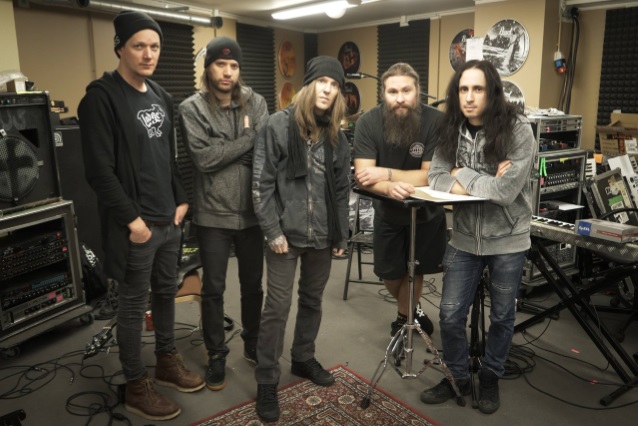 CHILDREN OF BODOM Reveals Producer For Next Album

Finnish metallers CHILDREN OF BODOM will enter the studio tomorrow (Wednesday, March 28) to begin recording their tenth album for a late 2018 release. The follow-up to 2015's "I Worship Chaos" will once again be recorded at the band's own Danger Johnny Studios in Helsinki where the group's last two efforts were laid down. Helming the sessions for the new disc is producer Mikko Karmila, who worked on "I Worship Chaos" and 2013's "Halo Of Blood".

CHILDREN OF BODOM guitarist/vocalist Alexi Laiho previously described Danger Johnny as "kind of like the COB headquarters where everything is. We have a rehearsal space, studio and warehouse where we can keep our backline, our cars, there's a lounge area, so it's pretty awesome. Everything for 'I Worship Chaos' was recorded there, including the drums. It's awesome, because it beats having to book studio time and spend a ton of money on recordings. It's a different vibe compared to recording at home, and that's why I actually moved in there a couple of weeks before we started recording. We were missing two songs and I figured I'd get more done if I'm there all the time. I usually get so much done when I'm in there."

CHILDREN OF BODOM's recent U.S. tour saw the band celebrating the 20th anniversary of the release of its debut album, "Something Wild". The 24-date trek included an appearance at last year's Ozzfest Meets Knotfest.