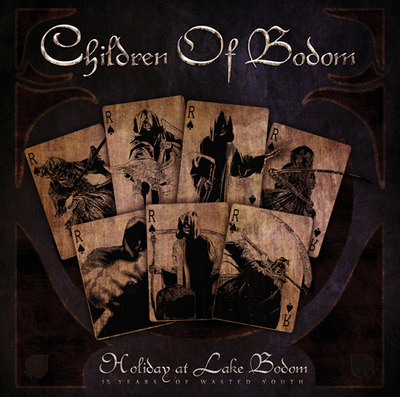 A previously unreleased video for the song "Shovel Knockout" from Finnish metallers CHILDREN OF BODOM can be seen below. The clip, which was directed by Jussi Hyttinen for FLC415 (MTV3, The Finnish National Lottery),adeptly chronicles "what happens from the time a live show ends through to the next gig in a new city" (i.e. lots of drinking and flipping the bird!). The song itself appears on CHILDREN OF BODOM's latest studio album, "Relentless Reckless Forever".

On May 22, CHILDREN OF BODOM will release "Holiday At Lake Bodom (15 Years Of Wasted Youth)", a very special CD+DVD career retrospective in celebration of the band's 15th anniversary. The release will spotlight specially selected tracks from every one of the group's critically acclaimed albums (1997's "Something Wild", 1999's "Hatebreeder", 2000's "Follow The Reaper", 2003's "Hate Crew Deathroll", 2005's "Are You Dead Yet?", 2008's "Blooddrunk" and 2011's "Relentless Reckless Forever"),plus two newly recorded (and undeniably fun) cover songs and detailed liner notes penned by the members of CHILDREN OF BODOM themselves. The DVD portion of the package will include "candid touring and backstage footage from around the world”, plus the "Shovel Knockout" video.

"'15 Years Of Wasted Youth' is the sound of CHILDREN OF BODOM working hard, partying hard, being relentless and stubborn," says the band's guitarist/vocalist Alexi Laiho. "We went through many brick walls to get to where we are, and after seven studio albums, two live albums, non-stop touring, bleeding and breaking a lot of bones, I think we are justified in putting this album out. Let the music speak for itself. You have been warned."

The release of "Holiday At Lake Bodom (15 Years Of Wasted Youth)" continues CHILDREN OF BODOM's year-long anniversary celebration, which kicked off with the band's highly successful "15th Anniversary" headlining tour of North America.

In an interview with MusikUniverse.net, Laiho said that the band is scheduled to commence the songwriting sessions for its next album this fall for a 2013 release. "I have ideas, but I haven't done anything about it," Alexi said. "'Cause the thing is, I can't write when I'm touring; it's not the right kind of environment for me. I know a lot of people do it, but I just can't. And it's OK, 'cause I build a lot of ideas in my head, and my memory sucks, but one thing that I never forget is the riffs; they're always in my head somehow. So it's really not a problem."

"Relentless Reckless Forever" sold nearly 11,000 copies in the United States in its first week of release to debut at position No. 42 on The Billboard 200 chart. The band's previous CD, 2008's "Blooddrunk", opened with 19,000 units to land at No. 22. This number was roughly four times the opening tally of "Blooddrunk"'s predecessor, "Are You Dead Yet?", which premiered with 5,000 units back in October 2005 to enter the chart at No. 195.