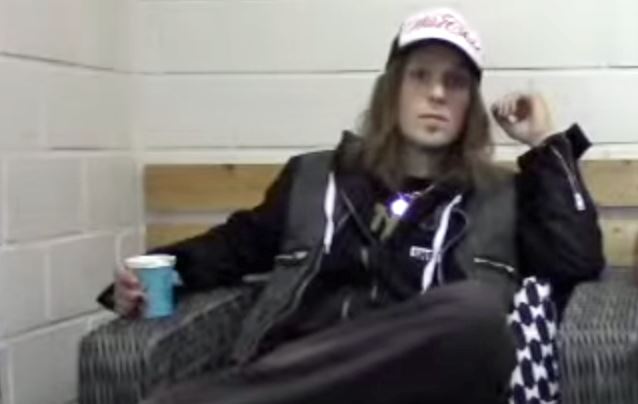 TJ Fowler of Skullbanger Media conducted an interview with guitarist/vocalist Alexi Laiho of Finnish metallers CHILDREN OF BODOM before the band's August 1 appearance at the Kuopio RockCock festival. You can now watch the chat below. A couple of excerpts follow (transcribed by BLABBERMOUTH.NET).

On lyrical surprises on CHILDREN OF BODOM's new album, "I Worship Chaos":

"One of the examples was the song called 'Morrigan' that I was explaining about. Morrigan is the goddess of the underworld, and witchcraft in general is something that I've been intrigued [by] since I was a kid, really. And, well, in the last couple of years, I've actually learned a lot about it. And I guess I just sort of automatically incorporated that world into the music, especially in the lyrics. There are a couple of songs where people that who know anything about that kind of stuff would definitely pick it up, pick up that vibe."

On the groovier musical direction of CHILDREN OF BODOM's new material:

"'Morrigan' is a midtempo song, so it's not total craziness, all over the place. But there's obviously gonna be a lot of fast tracks on the record. But it's definitely heavier and I would say that it does have that groove that you were talking about. I think that's one of the things that makes it kind of heavier. And also just the fact that, structure-wise, the songs are definitely simpler. So they're kind of more approachable, which makes the whole thing a lot catchier."

On what he is proudest of on the new album:

"Well, the songs that are my favorites at the moment…. That list changes every day, but it seems that 'Morrigan' and the title track, 'I Worship Chaos', a song called 'Horns', and a song called 'Widdershins'. Those seem to be the ones that are gonna stick with me in the long run. Oh, yeah… And the opening track, 'I Hurt'. Dude, I mean, there's actually a lot of good songs on that album. Wow!"

"I Worship Chaos" will be released worldwide on October 2 via Nuclear Blast. The artwork for the CD was created by Finnish artist Tuomas Korpi.