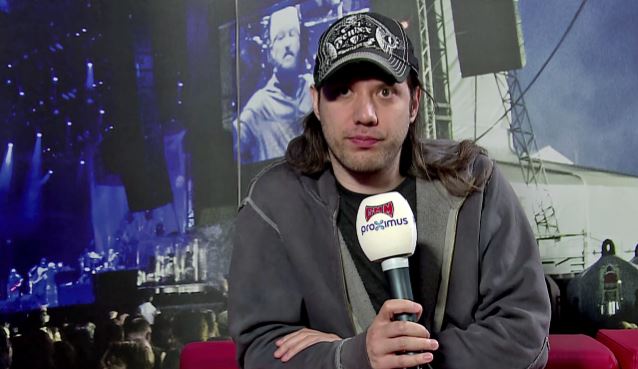 CHILDREN OF BODOM's JANNE WIRMAN On 'I Worship Chaos': 'It Has A Pretty Dark Atmosphere'

Keyboardist Janne Wirman of Finnish metallers CHILDREN OF BODOM was interviewed at this year's edition of the Graspop Metal Meeting, which was held last month in Dessel, Belgium. You can now watch the chat below. A couple of excerpts follow (transcribed by BLABBERMOUTH.NET).

"The new album, people have called it 'dark.' It has a pretty dark atmosphere. Not like our music has ever been very happy [laughs], but compared to our [previous] stuff, it has a pretty dark atmosphere. I like it. So it's a bit different. It's always different. I mean, we try not to record the same album over and over again anyways, but it has a different approach, and I like it."

On the songwriting process in CHILDREN OF BODOM:

"Yeah, Alexi [Laiho, guitar/vocals] writes riffs at home, and then… It's the part when we kind of… It's like having a real job, 'cause we go every day, five days a week, we go to the rehearsal room and do that for months. And Alexi shows up with his riffs, and we, together as a band, arrange the songs. I like that part, 'cause that's the only part, in my profession, playing in a band, when I have a normal schedule. I go to work every day. [Laughs] 'Cause, otherwise, you know, it's just flying around the world and touring and festivals, but when we're writing music, I go to work every day."

"I Worship Chaos" will be releassed worldwide on October 2 via Nuclear Blast. The artwork for the CD was created by Finnish artist Tuomas Korpi and can be seen below.

The song "Morrigan" can be streamed below.

CHILDREN OF BODOM in May announced the departure of the band's guitarist of the past decade, Roope Latvala.