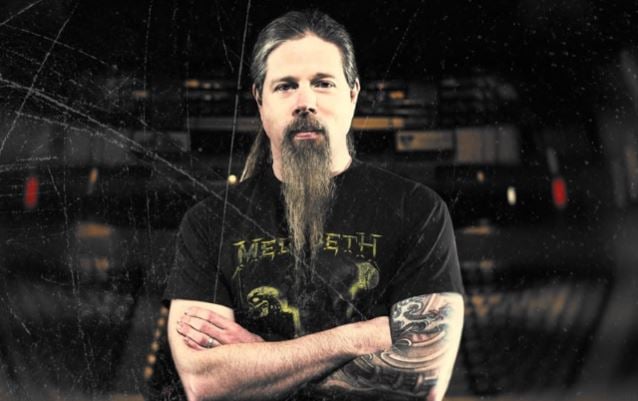 CHRIS ADLER Would Never Leave LAMB OF GOD For MEGADETH

LAMB OF GOD and MEGADETH drummer Chris Adler was interviewed on the latest installment of HATEBREED frontman Jamey Jasta's official podcast, "The Jasta Show". You can now listen to the chat using the SoundCloud widget below. A few excerpts follow (transcribed by BLABBERMOUTH.NET).

On the songwriting sessions for the new MEGADETH album:

"Most of the material that I got [from MEGADETH mainman Dave Mustaine]… We were on tour… LAMB OF GOD was on tour in Australia, and he sent me ten demos and wanted me to come from the tour right into the writing and recording process. So I didn't really have any time to rehearse, which turned out to be good, because I didn't really wanna learn [the songs] the way that they were; I didn't really necessarily love everything that was going on there. And I told him upfront, even before we left Australia... I said, 'First of all, I don't have a way to really rehearse these, 'cause, as you know, on tour, you don't have much time with your instrument, unless you're playing a show. So I'll rehearse backstage with my practice kit as much as I can, but I'm not gonna 'em straight through. We're not gonna be able to run through a set. And, to be honest with you, there's a couple of things here that I'm not really that big of a fan of. And I know that you're calling me because I am the biggest MEGADETH fan in the world, and I hope that me telling you that isn't a super bumout.' And he was super open to it. He's, like,' Man, if you don't like it, let's figure it out. Let's cut it off. Let's make it faster. Let's change the length of it. Let's do whatever.' So, the process… It was great. I was there for two months, actually, and we were doing, like, 10-14-hour days every day, and it was a long process of trying things out, changing things around, making 'em longer, making 'em faster, making 'em shorter, doing all this kind of stuff. And people were coming and going throughout the process, but it was, basically, really, just me and him."

"When I first heard the demos, it was well played and it was drum machine, drum samples and stuff, and it wasn't really, kind of, my style of playing. It felt like, kind of, what had been going on before, where it was just [hums a basic beat]. And I really wanted to not have to do that. And so, right away, I brought that up. I said, 'Listen, I'm thankful that you're calling me. But are you calling me because somebody is telling you to call me, or are you calling me because you've heard what I've done and you want me to do some of that — at least some of that — on your record. Because this stuff that's on here is not… that's not cool.'"

On whether Dave Mustaine was open to suggestions during the songwriting process:

"When you're working with somebody like him, or, really, anybody that has a career that long, they know what they want, and they're very focused. And he, in particular, has always had a very clear vision of what MEGADETH is. And there's nobody… no one in the world's gonna tell Dave Mustaine what MEGADETH is. But he was open to it. For example, we did a [cover of a] song called 'Foreign Policy' by FEAR — and old punk rock tune — and it was fun. And it's a punk rock tune. But as we soon as we learned it… We learned it and played it in one day. And I'm throwing in a ton of double bass. And he stops the song in the middle. He's, like, 'Woah woah woah. What's with the double bass? It's a punk rock song. What are you doing?' I was, like, 'Yeah, it's a punk rock song. But FEAR was a punk rock band. MEGADETH is a metal band. This is MEGADETH. Let's do this the MEGADETH way.' And we kind of moved on to other things. And the next day he came back in. He said, 'You know what?! I was thinking about that last night. You're right, man.' He was, like, 'Let's do this. Let's make it MEGADETH.'"

On how he told his LAMB OF GOD bandmates that he got the offer to play with MEGADETH:

"The first thing I did after I had that [initial] conversation with Dave [Mustaine] was to get in touch with the [other LAMB OF GOD] guys and just see, 'How does everybody feel about this? I don't want it to come across as a threat. I don't want this to feel like I'm leaving [LAMB OF GOD] or anything. If ever it came to a point where there was a question of 'this or that,' it's gonna be LAMB OF GOD. LAMB OF GOD is my baby. Being in MEGADETH is kind of like I'm helping babysit somebody else's kid. I love being there, but it's not… that's not where home is, for me. So it's not gonna be, for me… Again, if ever a question came up, I'm staying with you guys. I don't want you to think of it that way. So, does anybody have any objections, as far as, does this make anybody feel weird or does it… whatever?' And everybody was stoked. 'Cause they know. They just know. I mean, I'm up 'till four in the morning every day listening to MEGADETH. So, they were, like, 'Dude, it's amazing. Good for you.'"

On his plans to tour with MEGADETH:

"We kind of all have that in common, in that we're not… None of us are getting younger, and we're both fairly successful, so we have the ability to, kind of, do… hit different spots at different times and keep everybody happy — other than maybe my kid. [Laughs] If it does come to a conflict, I would say to Dave, 'Hey, I know some [other] great [drummers I can recommend], if you wanna do something.' And there's already been one conflict. There's a show in Japan, where I can't make it, because I've promised for two years that I would be art a family reunion with Willie [Adler, Chris's brother and LAMB OF GOD guitarist]. So LAMB OF GOD is taking this one weekend off. For, like, two years, it's been on the calendar. And, of course, they're playing that day [at the Loud Park festival] in Japan. MEGADETH is."

On who might sit behind the drum kit for MEGADETH at the shows Chris is not able to make:

"Their drum tech, Tony [Laureano], is a fantastic drummer. He played in DIMMU [BORGIR] for a while. [He's] a super-talented guy. So I think they are pretty flexible and able to, kind of, work around me a little bit, and Dave's willing to. That's what Dave told me from the beginning. I said, 'I'm gonna be busy as shit for the next twelve to eighteen months with LAMB OF GOD, and I will do everything I can to play as many shows with you as I possibly can, but there may be a point where I have to ask you to wait.' And he said, 'I'll wait for you.' So I think he enjoyed working with me, and we'll just kind of see where it goes."

On the failed attempt at a reunion of MEGADETH's "Rust In Peace" lineup, featuring Nick Menza on drums and Marty Friedman on guitar:

"I can't say too much about it. I know that there were multiple reasons why it couldn't work. And I have absolutely nothing bad to say about Nick. I know he's been vocal in the press about wishing me good luck, and I know he and Dave have, kind of, gone back and forth with some stuff. But, you know, my favorite records are some of the stuff that Nick did. I think he's an amazing drummer. I'm learning the setlist now and trying to learn his parts, and it's not easy. He's fantastic. And even when Dave… After that first phone call, when Dave called me and asked me to join, once I got my head together and we talked again the next week about doing it. I said, 'I'm not a business manager here, but you are aware that everybody wants Nick and Marty in the band, right? I would love to be in MEGADETH, but, as a fan, I wanna make sure you know that that's what people want.' And he's, like, 'Chris, I know. I know. Fuck, I know.'"

In addition to Mustaine and Ader, the recording lineup for the new MEGADETH album included founding bassist David Ellefson and Brazilian guitarist Kiko Loureiro, best known for his work with ANGRA.

Songtitles set to appear on MEGADETH's new album, which is being produced by Mustaine and Toby Wright (ALICE IN CHAINS, KORN),include "The Emperor Has No Clothes", "Tyranocide" and "Poisonous Shadows". The latter track features piano playing from Kiko as well as orchestration from famed Nashville arranger Ronn Huff, the father of former MEGADETH producer Dann Huff. MEGADETH also recorded two cover versions during the sessions for the new CD: "Melt The Ice Away" by BUDGIE and the aforementioned "Foreign Policy" by FEAR.