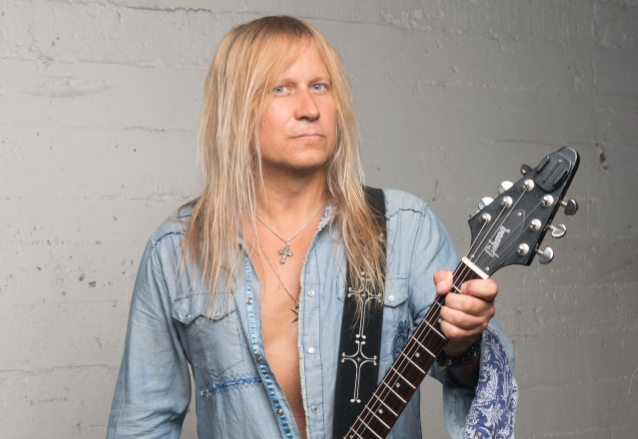 CHRIS CAFFERY Is 'Optimistic' There Will Be A New SAVATAGE Album

Chris Caffery, who has been a member of SAVATAGE for more than 30 years, spoke to That Metal Interview about the possibility of new music from the cult metal outfit. He said (as transcribed by BLABBERMOUTH.NET): "We've been writing and talking about it now. It's the first time in a long time where I actually have been trading riffs and songs with Jon [Oliva, SAVATAGE frontman] over the phone, and I have some really cool things. I have this one song that I wrote that he really likes and it's kind of one that I think would be a good lead-off track for SAVATAGE. [We're] just calling it 'The Dungeous Are Calling Again' and it's a really, really, really cool metal song.

"We'll see what happens," he continued. "I know a lot of people would like to see a new SAVATAGE record. I think the cards are lining up. Whether or not it's gonna fall into place, we'll find out. I always tend to stay really positive and optimistic about it — I have for 20 years. So hopefully it does wind up happening. We're not getting any younger."

Caffery went on to say that plans are also afoot for SAVATAGE to release some vintage concert footage "in DVD form." He said: "There might be a couple of things people will be really happy to see pop up. 'Cause there was some stuff that we had, recorded some full concerts from 'The Wake Of Magellan' tour, and then there's some other footage that we might wanna try to [put out]. Unfortunately, there wasn't anything, really, that we could use from the Criss [Oliva] era as far as full concerts, which is very, very unfortunate. But we have some stuff from some of the other ones."

This past spring, Jon Oliva told That Metal Interview that he had been working with Caffery and guitarist Al Pitrelli on new SAVATAGE material "over the last couple of years." Oliva went on to say that he and his SAVATAGE bandmates "would all love" to make a new studio album. "But there's no deal with a record company to do it," he explained. "There's no plan — actual plan — saying we're gonna start recording SAVATAGE. There's no plan like that. All we're doing, as being musicians and songwriters, is we're compiling new material. So if we do get, 'Hey, why don't you guys do this? We've got a company that wants to give you guys [a deal], we're gonna be prepared.

"A lot of the fans, which it makes me upset, because SAVATAGE fans, I love them so much, because they have never, ever turned their backs on SAVATAGE — ever. And I just don't want to lead them down a road of false shit," he added. "If something happens where we say, 'Okay, we're ready to do this. Let's do it, guys,' I will be the first person to make a professional press release to tell everybody. But I just don't want to, because it's not solidified in stone right now. Do we wanna do it? You bet your fucking ass we wanna do it. But do we have the material for it? You bet your fucking ass we have enough material for another 10-year run. But all I can say is if we do a SAVATAGE thing, it's gonna fuck you people up — it's gonna be fucking blowaway."

This past September, Jon Oliva was arrested on the west central coast of Florida for driving under the influence as well as possession of a controlled substance. Police charged Oliva with possession of cocaine, which is a felony, and DUI, which is a misdemeanor. He has a court appearance scheduled for late January.

Despite his health issues, Jon said that he didn't regret the way he had lived his life. He wrote: "I lived the rock 'n' roll lifestyle since I was 18. It's all I knew and I enjoyed the ride very much. But there comes a time in everyone's life where you have to step back and make some life-changing decisions... which I have."

Shortly after SAVATAGE's reunion performance at the 2015 Wacken Open Air festival in Wacken, Germany, Oliva claimed that he felt better than he had in 20 years because he had "stopped drinking and eating" in preparation for the concert. He explained: "It's my voice that's freaking me out, because, even when I was in my late 20s, early 30s, doing songs like '24 Hours Ago' were always really hard to do. And, of course, I didn't realize that it was all the drugs and alcohol I was doing. But, after doing that, getting my act together and stuff, singing '24 Hours Ago', it's actually easy now. [Laughs]"

In addition to his work with SAVATAGE, Oliva is well known for co-creating the classical music-meets-prog rock and pyro act TRANS-SIBERIAN ORCHESTRA alongside the project's founder Paul O'Neill. Oliva has reportedly remained involved in TSO's activities even after O'Neill's April 2017 death of an accidental drug overdose.

Jon's brother Criss, who was one of the founding members of SAVATAGE, was killed in October 1993 by a drunk driver when he and his wife Dawn were en route to the Livestock festival in Zephyrhills, Florida. The driver of the other car was found to have a drunk driving record of seven prior DUIs and having a blood alcohol content of .294 percent.