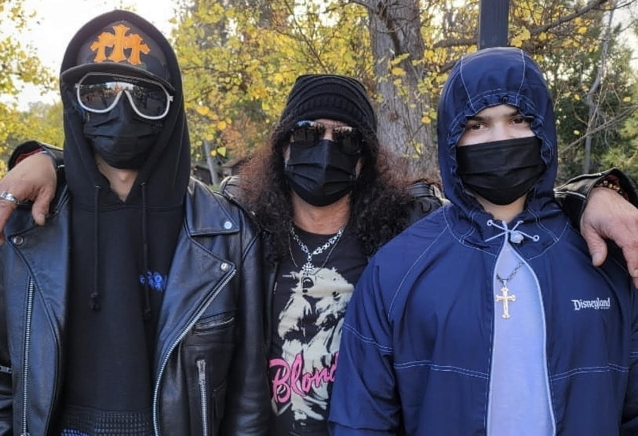 GUNS N' ROSES guitarist Slash and some of his family members — including sons London and Cash Hudson, as well as his longtime girlfriend Meegan Hodges — spent Christmas Eve and Christmas Day at Disneyland in Anaheim, California.

Hodges shared several photos of the outing on her Instagram and included the following caption: "Our Christmas Eve and Christmas Day 2021 #disneyland #family #xmas #thanksDianeforalwaysmakingourdisneychristmasspecial".

London and Cash's mother is Perla Ferrar, whom Slash divorced more than three years ago.

As previously reported, GUNS N' ROSES will release a new four-song EP, "Hard Skool", on February 25, 2022. The effort, which is exclusive to the GUNS N' ROSESofficial store, contains the two new songs the band released in the summer — the title track and "Absurd" (stylized as "ABSUЯD") — as well as live versions of "Don't Cry" and "You're Crazy".