CHRIS FEHN Hopes He Can 'Someday' Return To SLIPKNOT

Former SLIPKNOT percussionist Chris Fehn is hopeful that he can one day return to the band.

Fehn sued SLIPKNOT in March, claiming he hadn't been properly compensated for his years of touring and recording with the group. Fehn, a member since 1998, was officially dismissed from the band earlier this year.

On Thursday (October 3),Fehn took to his Instagram to apologize for his lack of updates, explaining that he has been busy focusing on family life. After one fan wrote in the comments section that he should "go back to SLIPKNOT," Fehn replied: "Someday."

Fehn claimed in his lawsuit that he had been told that all the band's income was being funneled through one company that split the profits between the group members. But he alleged that he recently discovered the existence of several other SLIPKNOT-related business entities through which other members were collecting more money.

Fehn specifically accused Crahan and Taylor of shady business dealings and demanded a full forensic accounting done on SLIPKNOT's companies and assets, so that he could collect the damages and profits he believes he is owed.

Shortly after the lawsuit was filed, SLIPKNOT dismissed Fehn in a statement posted to the band's web site, saying, "Chris knows why he is no longer a part of SLIPKNOT. We are disappointed that he chose to point fingers and manufacture claims, rather than doing what was necessary to continue to be a part of SLIPKNOT."

Taylor also addressed the accusations via Twitter, saying: "Try being wrongfully accused of stealing money from someone you cared about, and having a lot of your fans believe it."

Fehn, known for wearing a Pinocchio-style mask, participated in all the band's albums through 2014's ".5: The Gray Chapter".

Chris was replaced in SLIPKNOT's touring lineup by a percussionist nicknamed "Tortilla Man."

Tortilla Man joined SLIPKNOT five months ago, when he was first featured in the video for comeback single "Unsainted". Since then, there has been much speculation about his name, with some SLIPKNOT fans getting quite obsessed with trying to work out the real identity of the band's latest recruit.

SLIPKNOT's latest album, "We Are Not Your Kind", was released on August 9 via Roadrunner Records. 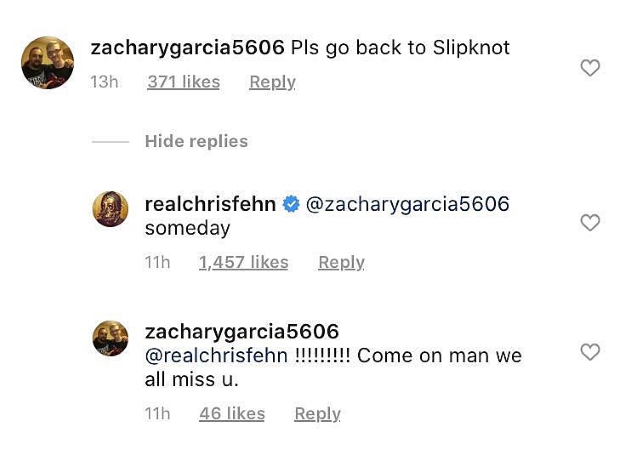