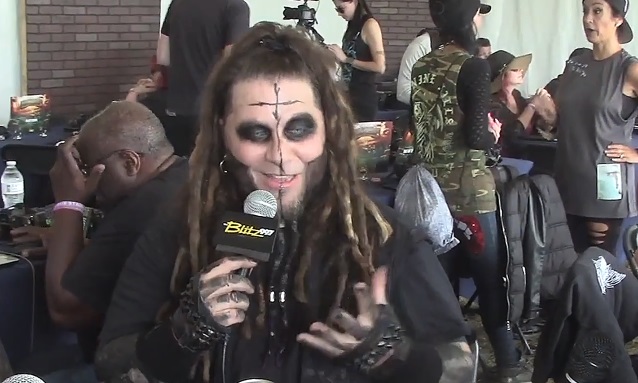 CHRIS HOWORTH Says IN THIS MOMENT's Sound Is 'An Evolving Process'

Ronni Hunter of 99.7 The Blitz conducted an interview with IN THIS MOMENT at this year's edition of the Louder Than Life festival, which was held September 30 - October 1 at Champions Park in Louisville, Kentucky. You can now watch the chat below.

Asked if IN THIS MOMENT's latest album, "Ritual", is a good indictor of where the band plans to go musically on future recordings, guitarist Chris Howorth said: "It's kind of hard to predict that we're gonna stay a certain way. Maria [Brink, vocals] is the front person and her lyrics are the driving force behind a song — people relate to what she's saying — so a lot of times it depends on how she's feeling, artistically, the direction of the sound. And she was definitely feeling a little bit more stripped down — and so we were all. We had a lot of really cool samples and I don't wanna say 'campy,' like 'Sex Metal Barbie', and fun stuff, where we wanted to be a little more serious this time and more stripped down, I guess you could say. So everything kind of led us towards that. And even now, Maria's kind of taking a little bit different direction stylistically, the way she looks and dresses on stage. So it's just kind of an evolving process."

"Ritual" was released this past July by Atlantic Records in partnership with Roadrunner Records. The disc features a guest appearance from JUDAS PRIEST frontman Rob Halford on the song "Black Wedding".