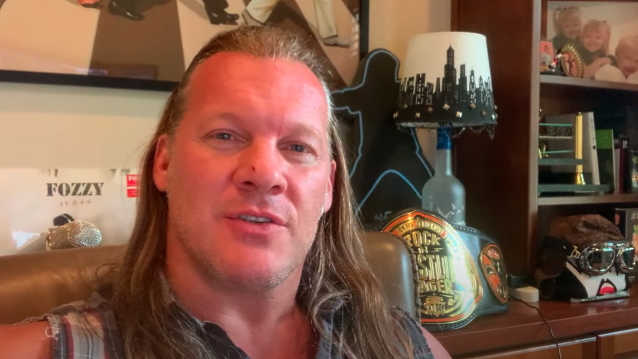 CHRIS JERICHO: 'I'm Not As Terrified Of The Virus As Some People Are'

In a new interview with KNAC.COM, FOZZY singer and former WWE wrestling superstar Chris Jericho was asked how he feels about the prospect of taking part in meet-and-greets with fans amid the COVID-19 pandemic. He responded: "I've never been 'isolated' during this whole coronavius thing. We've been working every week; we've been talking with people and meeting with people. We haven't been shaking hands or anything like that. I'm not as 'terrified' of the virus as some people are. I'm not saying that in a reckless way. I meet people out on the street. We're not spitting in each other's faces and we're not shaking hands or tongue kissing or anything like that. Since I'm taking these steps, I'm just not as worried about it."

COVID-19 spreads mainly from person to person through respiratory droplets produced when an infected person coughs, sneezes, talks, or raises their voice (e.g., while shouting, chanting, or singing). These droplets can land in the mouths or noses of people who are nearby or possibly be inhaled into the lungs. Recent studies show that a significant portion of individuals with COVID-19 lack symptoms (are "asymptomatic") and that even those who eventually develop symptoms (are "pre-symptomatic") can transmit the virus to others before showing symptoms.

To reduce the spread of COVID-19, Centers For Disease Control And Prevention (CDC) recommends that people wear cloth face coverings in public settings when around people outside of their household, especially when other social distancing measures are difficult to maintain.

Last month, Jericho told Australia's Triple M radio station that FOZZY has "so many great songs" written for the band's follow-up to 2017's "Judas" album that "it's gonna be hard to pick the singles."

FOZZY guitarist Rich Ward and producer Johnny Andrews are once again "doing the lion's share" of the songwriting for the new LP, which is tentatively due in the fall.

FOZZY's next album will include the song "Nowhere To Run", which recently hit Top 10 on the rock radio chart. The track is the band's third to hit Top 10 on rock radio, following "Judas" and "Painless".

Jericho is one of the most popular performers in the history of World Wrestling Entertainment. In 2001 he was crowned the WWE Undisputed Champion and in 2017 become the first ever "Double Grand Slam" champion in WWE history. He has been named one of the top five most charismatic performers of all-time by WWE.com. In January 2019, he officially signed with All Elite Wrestling — a brand new pro wrestling company started by the owners of the NFL's Jacksonville Jaguars, Tony and Shahid Khan.