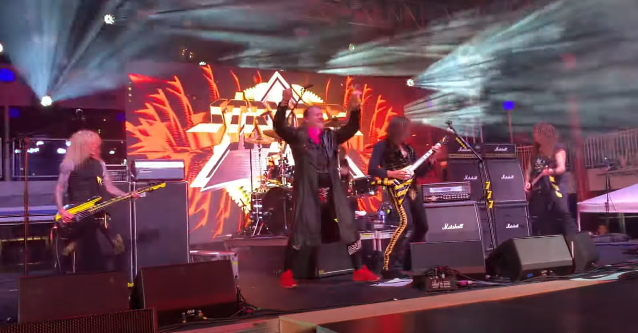 FOZZY frontman and wrestling superstar Chris Jericho joined STRYPER on stage during the "Chris Jericho's Rock 'N' Wrestling Rager At Sea: Triple Whammy" cruise at the end of October to sing a cover version of the JUDAS PRIEST classic "Breaking The Law". Fan-filmed video footage of the performance can be seen below.

Back in July 2020, STRYPER's Michael Sweet came to Jericho's defense after Sebastian Bach accused FOZZY's lead singer of using pre-recorded vocal tracks during live performances. At the time, Sweet wrote on his social media: "You know it's funny, @chrisjerichofozzy doesn't have anything to prove as a singer, a wrestler or a person. He's achieved success and made quite the name for himself. He's about as active as anyone I know and is also a great guy with a big heart. He's also my friend. @stryper had him up on stage to perform with us at @hobanaheim and I was honored to have him sing on one of my solo songs a few years back as well.

"My point? Chris is a very talented individual and a grounded human being. He doesn't need validation from anyone. He's made his mark and will continue to do so. He was at my wedding in 2010 and we had our own 'sing off' on the dance floor to the @bonjovi classic, 'Living On A Prayer' - Remember this Chris? Good times.

"Anyway, I just wanted to say that Chris is the man, and a good one at that. Love ya buddy".

In 2012, Jericho brought up STRYPER while discussing his faith in an interview with Beliefnet, which is described as "a large multi-faith e-community that aims to provide a free forum for religious information and inspiration, spiritual tools, and discussions and dialogue groups." He said: "I basically got into Christianity through Christian rock, which is another reason why music has always been important to me; it was through STRYPER. And Michael Sweet and I have become really, really good friends.

"When I was in high school, it was ambition and fate. And my ambition was to play bass guitar in a Christian metal band. And I vividly remember having a deam that I was in STRYPER. And here I am, whatever it was — 20, 25 years later — on stage singing with STRYPER. It blew my mind. It blew my freaking mind, man. I even said that on the microphone: '25 years ago, I had a dream that I would be playing in STRYPER, and now I am.'

"I have been a Christian for years and years and years," he added. "That's how I've been able to get this far — by always having God have my back. And I haven't always been the best of Christians, but at the end of the day, I know who the boss is. And he has granted me two wishes, to where if I died tomorrow, how many [other] people can say they've done this, and the answer is zero. How many people have been a world champion in the WWE and had a record that was No. 1 on the Billboard Heatseekers charts? I mean, there might be a novelty thing, but for a real band, I think I'm the only one; I think I am."