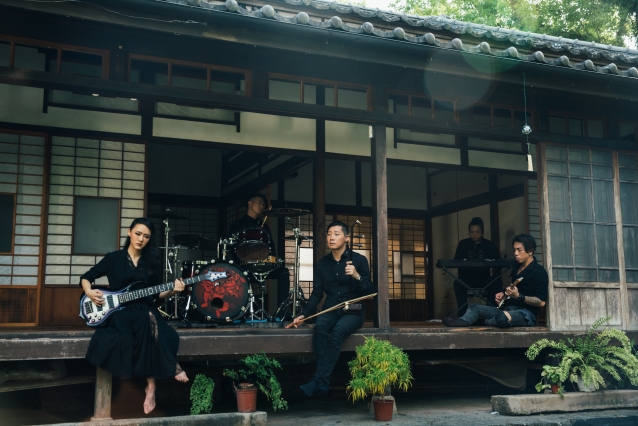 Taiwanese metallers CHTHONIC have released a music video for a delicate acoustic version of "Millennia's Faith Undone", taken from their latest album "Battlefields Of Asura".

After the release of the music video of their new track "Millennia's Faith Undone" at the beginning of the month, CHTHONIC has now dropped the official music video of the "Aeon's Wraith" version (acoustic version),featuring Denise Ho, on the evening of Mid-Autumn Festival. The original crew, including director Birdy, lead actor and actress Finn and Chia-Yu Chang, created the finale of the series of stories. Being executed during the White Terror, the protagonist dies without a place to rest in peace, either is his last will sent to his wife and children. Starting its first page from "Kaoru" (acoustic version),the story finally comes to a sorrowful end which is also a traumatic moment in Taiwanese history.

To faithfully present the period setting in the new album, Birdy had the production of the music video take place at the historical architecture Yilan Literature Museum. Set in the antique traditional Japanese style house, the music video gives CHTHONIC a delicate vibe different from their onstage look; Denise Ho, who gladly agreed to be featured in CHTHONIC's latest album, first time setting foot in Yilan Literature Museum, also didn't hesitate to show her fondness of the location.

Usually, in the acoustic version of CHTHONIC music videos, the costume designing tend to be more "low key." However, bassist Doris's glacial style added a crucial touch that left all the crew impressed. Doris noted that she's thankful for the hard work by the hair and makeup artists. Besides, compared to the past metal version music videos which require more dramatic expression and gesture than live performance, she prefers the shoot for the acoustic version as it allows more natural body movement of everyday life. Moreover, frontman Freddy stated that to prepare for the music video, he had to refresh his slightly rusty erhu playing. After a busy day in parliament, he still had to practice late at night. He also joked: "Luckily I'm not in the shot too much as I didn't play it right in a couple spots!"

CHTHONIC will release its first album in five years on October 12. Although the "Aeon's Wraith" version of "Millennia's Faith Undone" is not included in the album, it will be released as a single on vinyl. Worth mentioning, this will be the first CHTHONIC vinyl. As an avid vinyl collector, Jesse Liu, the guitarist in CHTHONIC, excitedly announces that he must be the first one to have the vinyl once it's done as he can't wait to have it in his collection.