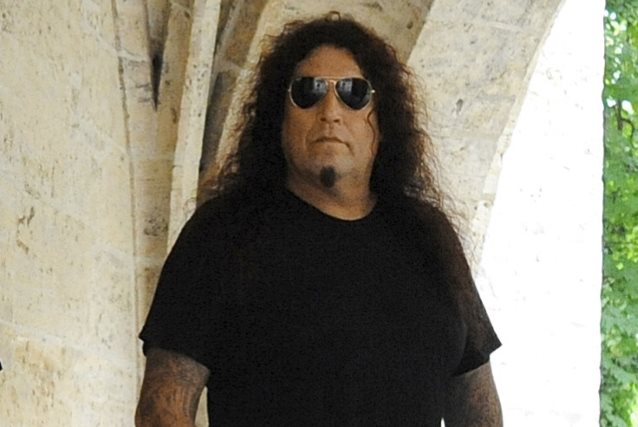 CHUCK BILLY On TESTAMENT's Musical Direction: 'We Can't Do Anything Different At This Point'

Vocalist Chuck Billy of San Francisco Bay Area thrashers TESTAMENT was interviewed on recent episode of the "Nekcbreaker" podcast. You can now listen to the chat using the SoundCloud widget below.

Asked if there is an unspoken competition between the classic thrash metal bands to outdo each other with their new album releases, Chuck said: "It definitely inspires you, because [the other bands] raise the bar, and every time the bar is raised, especially for a classic band's been around and putting out strong records, you're, like, 'We've gotta put out a good record.' And I think everybody kind of follows suit. Especially I'd say for Bay Area bands, when one band's playing some good thrash, the other ones seem to follow up with some more thrash. And I think bands like DEATH ANGEL, EXODUS and us have put out some really great records over the last couple of years. ANTHRAX as well. It's amazing that we could still create after so many songs."

He continued: "It was probably a competition over the younger years, growing and trying to establish yourself, but thirty years [later], I think we're established, so at this point, it lets up the pressure and it's not so competitive, I guess. We do what we do and we know what we do."

According to Chuck, TESTAMENT's three-decade-long discography makes it almost impossible for the band to venture too far from the stylings its most loved past works. "We watch newer bands playing now and there's some heavy bands and I love it, but we couldn't change and go, 'Let's go be heavy like that,' or, 'Let's write write like that,'" he explained. "We can't do that, because I don't think our fans would buy it. They'd say, 'What are you doing? Why are you trying to change so much?' So you kind of finetune and get what you do and kind of just take it to another level, I guess. I think we did on this last record, for sure. We can't stray too far, 'cause I think that's what's kept us here and kept the fans for thirty years still going, 'Right on! I still listen to you because you keep playing that style of what we do.' We can't do anything different at this point."

TESTAMENT's latest album, "Brotherhood Of The Snake", was released last October via Nuclear Blast. The cover was once again created by renowned artist Eliran Kantor, who also handled the art for the TESTAMENT's previous album, 2012's "Dark Roots Of Earth", and also worked with bands like HATEBREED, SOULFLY and KATAKLYSM in the past.