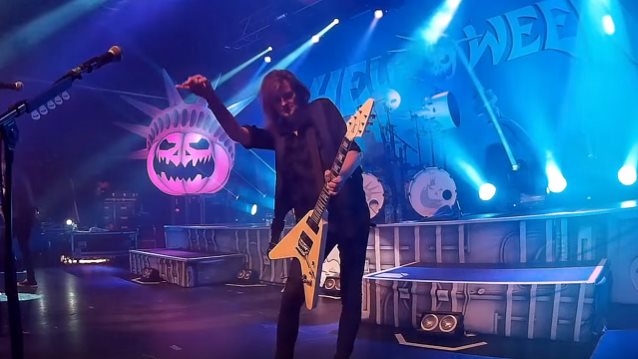 WEIKATH Says There Are Plans For HELLOWEEN To Record At Least One New Song With KISKE, HANSEN

On the possibility of the "Pumpkins United" lineup of HELLOWEEN recording new music:

Weikath: "There's an idea for doing at least one track — at least. Personally, I think we should do more; we should do something like an EP or so. But first of all, we have lots of stuff to run and to check out and to try in order to get the schedule until [the fall] when the first show is going to take place in Mexico City. And to crank all that, if we wanted to come up with one new track as the 'Pumpkins United', I think there's going to be lots of work to do. And so what's in the planning is, for now, just one track."

On how such a track would be released:

On whether the "Pumpkins United" lineup of HELLOWEEN has already written the song that will be recorded:

Weikath: "No, no, no. There's different levels of readiness for that. And I'm also looking into eventually recording something that I have ideas for what it could be and having a real collaboration on the songwriting for something like that. I think it's a far way out. From what I know, Michael Kiske is also on the verge of releasing some solo work as something, and so whatever is going to happen, I have no idea how. But surely we are looking for ideas and brainstorming. Maybe if Kai Hansen comes up with a track, maybe that Deris comes up with a track and I come up with a track or that [bassist] Markus [Grosskopf comes up with one], or someone writes something, and in which way that can be combined, or just one track is being chosen that everybody says, 'Okay, this track is so fucking cool, this is so strong, we take this one.' I have no idea. I don't know."

On whether he would close the door on the possibility of making a full album with "Pumpkins United":

On who was the first to suggest the idea of a tour like "Pumpkins United":

Weikath: "That was always Kai Hansen who said so — always. And usually then Markus and me, we would reject the idea before, because we had different managements, we had different schedules. And also the whole thing needed to be talked about and trust needed to be created. And so it took that process of blah blah blah and whatever, and then to cut things short, a few years later, after we had the 'Hellish Rock' tour, with GAMMA RAY and Kai Hansen, one got a little bit closer and found where the things in common are. And then I had that talk with Michael Kiske at a metal [festival] in France a few years ago. As I keep telling in interviews, I had one whisky in the other hand and I was pouring myself another whisky and I had a cigarette in the hand and I had another cigarette in the mouth when I talked to him, because I was kind of excited to meet that guy again after all this time. I always thought I should call him on the phone, but I never did it, because I thought maybe he feels disturbed or maybe he doesn't have the time. Only because Weiki feels he could call Kiske on the phone, going, 'Hey, how are you?' 'Yeah, right now I'm kind of busy.' And so that's actually why I never, never, never, never called him. And then there was that opportunity, and I said to him, basically, 'You shouldn't be too angry. You just must understand me. Back at that time, I saw myself as the one to put things into the right direction in HELLOWEEN, and the fact was nobody wanted to record another record with you, so I had to find a solution, or an opinion, and I had to state it to you, and this is how things came about back then. And I hope you can maybe forgive me about that, if I tell you this. Just try to understand me, what was going on back then.' And he said, 'Maybe I've already forgiven you. I don't know. But it's better if we talk when you are more sober and not so drunk.' I wasn't really that drunk; I was just really excited. Ever since, we just had meetings with the whole band and Michael Kiske and Kai Hansen about how to do things, because what Kai Hansen had been proposing was only picked up by the management, and they were going, 'Yeah, we think that's a very cool idea, and we should do this.' And then everybody was asking, 'How do we do it?'"

On how long he went without talking to Michael Kiske before they reconnected at the aforementioned French festival:

Weikath: "Ever since [he left the band], after [1993's] 'Chameleon' [album]. 'Cause we didn't know how to touch that subject and whatever, and you could see from the press and his comments that there was understandable discrepancy in our relationship. It was always, like, 'Kai Hansen has said this about you, Weiki, and Michael Kiske has said this about you, Weiki. And what do you say?' And so I was always firing back. And that's not necessary anymore if we have these talks going nad everything. And, basically, there's a time to be a little bit adult and grown up about things. Because so much time passed, there can't possibly be much more trouble, because everyone involved has more or less proven what he is capable of on his own and what he would be. Michael Kiske has been doing the solo records as they are, he's been involved in projects as they are and as they were, we've been doing the HELLOWEEN thing, and Kai Hansen has been doing his stuff. So everybody presented to the public what everyone was capable of. And so that's the history, that's all behind that whole thing. And what is there to quarrel or worry or fight about? There's nothing."