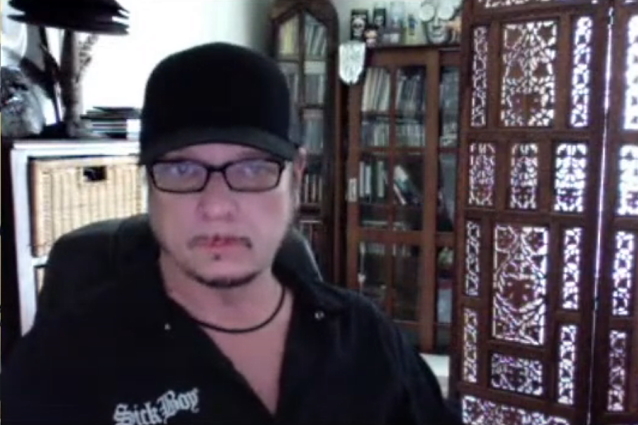 Longtime QUIET RIOT bassist Chuck Wright spoke to Tulsa Music Stream about his latest departure from the band. Last summer, it was announced that Wright would be leaving the group to make way for the return of Rudy Sarzo, who was coming back to QUIET RIOT after an 18-year absence.

Asked if he was surprised to see Sarzo rejoining QUIET RIOT, Wright responded (as transcribed by BLABBERMOUTH.NET): "Did it surprise me? No. It's happened three or four times maybe before, so it didn't surprise me at all, honestly. And truthfully, it couldn't have come at a better time for me because I was finishing up [my solo] record. And I'd been on the road since 2011 constantly and I was just burnt. So I was ready for a break from it, honestly. So, to me, it was welcome. When I got the call, [I was], like, you're doing me a favor 'cause if I keep doing this kind of schedule, it's gonna kill me. 'Cause it was pretty brutal. We were taking red-eye flights and no sleep ever. It was pretty brutal. And it's still like that. I saw their schedule [for 2022]. And I'm glad I'm at home and working [on promoting my solo album]. So it's all good for me."

Wright had served off and on with QUIET RIOT for nearly 40 years, appeared on nine albums, and was known as the bassist for QUIET RIOT's mega-hit "Metal Health" (Bang Your Head) and "Don't Wanna Let You Go". He was a contributing songwriter on 1986's "QRIII" and appeared in the band's video for "The Wild And The Young", among others. Wright had been one of QUIET RIOT's longest touring and recording members.

Regarding how his return to QUIET RIOT came about, Rudy told SiriusXM's "Trunk Nation With Eddie Trunk": "After Frankie told me in 2019 that he had pancreatic cancer, and then he started his fight, it was a daily fight. I mean, he would be taking multiple treatments to fight it, and he would be touring. And so it was really an exhausting thing. So we stopped kind of hanging out as much because, obviously, he was too tired. So we would text each other a lot, every day, and stay in touch.