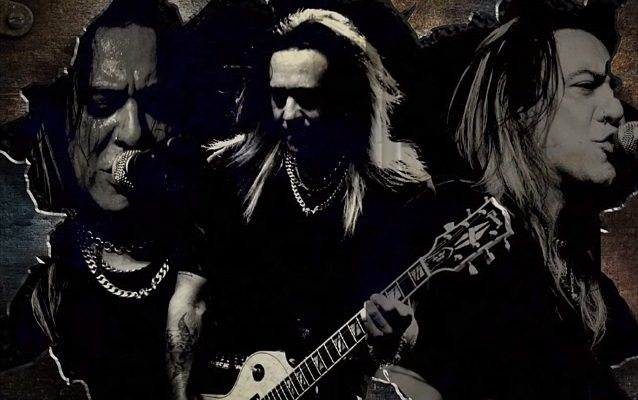 CINDERELLA guitarist Jeff LaBar will release his first solo album, "One For The Road", in late August through Rat Pak Records. Tracks on the CD range from classic, early CINDERELLA-style hard rock, to groove-laden blues rock, and everything in between. Jeff not only sings on this release, but also does a fantastic job of capturing the magic and spirit of the classic genre he helped create.

A teaser for "One For The Road" is available below.

In a June 2013 interview with Legendary Rock Interviews, LaBar stated about his upcoming solo album: "The way it started was, I've been threatening to do a solo album or years and at the end of [the summer 2012] CINDERELLA tour, my tour manager Larry Morand and my wife Debi called me on it. They said, Look, Tom's [Keifer, CINDERELLA frontman] solo album is coming out this spring, he'll probably tour on it through the summer. Now is the time, Jeff. It's time to get in the studio and start putting your money where your mouth is.' So, that's what I've been doing. Fred [Coury, CINDERELLA drummer] is not producing, but he is mixing everything I do. I'm in Nashville and Fred's in L.A. so I'm producing myself, singing and playing all the instruments. I am just getting guest drummers for the tracks. I am working with my engineer Ronnie Honeycutt here in Nashville and everything is going out to Fred to clean up and polish and make it sound good. [laughs]"

Asked how the direction of his solo material will be different from what he has done with CINDERELLA, Jeff said: "The first song I recorded could have been a CINDERELLA song, I think, but you know when you get guitar players putting out solo records, from what I've seen, they are very self-indulgent in terms of guitar playing or even sometimes, they're instrumental records. Mine is self-indulgent in the sense that it will cover a lot of different types of music. The first song I did is called 'No Strings' and like I said, it's a rock song, it could be a CINDERELLA song. The second song I recorded is a total blues waltz/shuffle. The latest song I've done is almost like a FLEETWOOD MAC-type ballad. I've also written a slow, chunky metal song, a blues slide song and a flat-out metal burner, fast song so I think I am really trying to explore all of my different influences. It's all me singing and playing everything but drums."