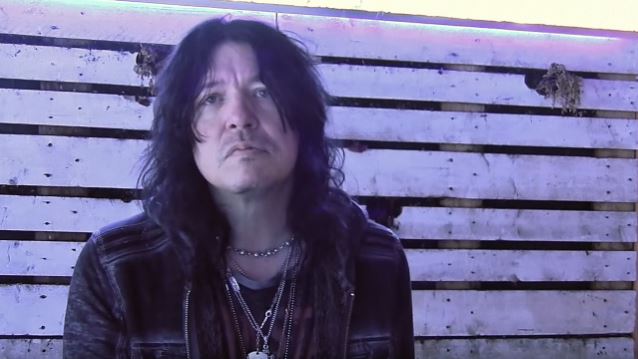 Meltdown of the WRIF radio station recently conducted an interview with CINDERELLA frontman Tom Keifer. You can now listen to the chat using the audio player below.

Asked which CINDERELLA album he would pick as the band's "quintessential" release, Tom said: "I think they're all very different in the way they're produced. I think that the songwriting really came from the same place, so in terms of songs, I like 'em all in that sense. In terms of production, which is something that is a learning experience as you go, of the CINDERELLA stuff, I think [1990's] 'Heartbreak Station''s my favorite, because I just love how dry and how raw that record is. And we evolved into that sound, whereas the first two records were a little more 'flavor of the day' in the processing — you know, things were a little slicker and kind of processed in the '80s — and we evolved into this more organic, kind of dry, raw, real sound on 'Heartbreak Station'."

According to Tom, he tried to mix his debut solo album, 2013's "The Way Life Goes", in the same way that "Heartbreak Station" was made "because, learning from the CINDERELLA experience, I think at the end of the day, when things are very dry and kind of raw, you feel the emotion more of the music and the players. So I took that experience and applied it to the solo record and tried to keep that record really honest and organic, the way 'Heartbrak Station' was."

Keifer also talked about how CINDERELLA was affected by the rise of the early '90s grunge movement, which symbolized the working-class spirit and focused on music over image.

Before grunge came along, "things were really kind of heading in the right direction for us, if you will," Tom said. "Actually, we started headlining on… [On 1988's] 'Long Cold Winter' [album], we did some support slots for AC/DC and JUDAS PRIEST, and then we went into a pretty big headline tour for that record and then straight into another headline tour on 'Heartbreak Station'. At the same time that [grunge came into the picture], the whole music scene changed and there was this changing of the guard of the new music and kind of out 'out with the old and in with the new,' at the same time that that was going on, I was actually starting to experience vocal problems, with a partially paralyzed vocal cord, right around the same time. So the '90s was not a joyride for me for both those reasons, because the career was on shaky ground as a result of the music scene changing and, at the same time, my instrument had been taken away from me by a neurological condition that I was told there was no cure for and that I would never sing again. So, yeah, [it was] a crazy time, and [I've] been really fighting and struggling and crawling back ever since, particularly with the voice, trying to fix that problem, which was a retraining process. It's taken years."

An expanded, deluxe edition of "The Way Life Goes" is tentatively due later this year. The set will include the original album remastered by Richard Dodd (KINGS OF LEON, Jason Aldean, LADY ANTEBELLUM), a bonus DVD with video extras, a documentary about the creation of the bonus tracks, and exclusive interviews with the band filmed during the new recording sessions. There will also be new tracks that were recorded last year at a Nashville studio with four-time Grammy Award-winning producer/engineer Vance Powell (Elle King, Chris Stapleton, Jack White).

Keifer is expected to begin work on the follow-up to "The Way Life Goes" in early 2018.