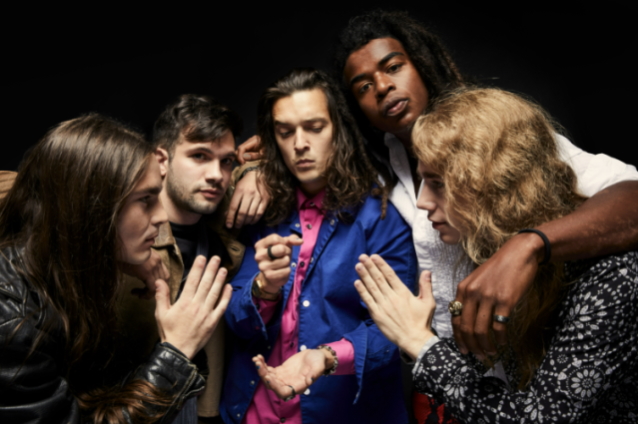 Los Angeles rockers CLASSLESS ACT is currently opening all dates on the current "The Stadium Tour" featuring MÖTLEY CRÜE, DEF LEPPARD, POISON and JOAN JETT AND THE BLACKHEARTS. Formed in 2019, the band's "Welcome To The Show" debut studio album was released on June 24 and features guest spots from MÖTLEY CRÜE's Vince Neil and THE DARKNESS's Justin Hawkins.

In a new interview with BLABBERMOUTH.NET, frontman Derek Day talked about the tour and how CLASSLESS ACT is being received during a timeslot where many concert-goers are just making their way into the stadiums.

"It's only great vibes," said Derek. "The stage crew, Live Nation has been super-nice, treating us like family. Performing onstage is euphoric and watching Joan Jett, MÖTLEY CRÜE, POISON and DEF LEPPARD every night is amazing. You can see why they need stadiums to do shows. They're fantastic and captivate an entire stadium in the palm of their hands. Everyone is super-inspiring."

"It's been a trip," he continued. "It's nice because we're still getting our feet ready and planted. We're getting our sound dialed in. Other times, there's been some weather delays and it causes the doors to open a little later, so we'll get onstage a little later. We've played for about four or five thousand, one time we played in front of seven-thousand eight-hundred and one show we played in front of twenty-one thousand for our first song, right from the get-go. It's been this crazy whirlwind of emotions and electricity. Regardless, we can't believe we get to be on this stage. It's a giant playground. We get to have fun and let loose."

Day then discussed the transition from playing clubs to cavernous stadiums where CLASSLESS ACT has had to learn how to perform on large, outdoor stages while on the fly. "In the club shows, we're stepping on each other's toes — literally, bumping into each other and hitting each other's headstocks," he said. "We've been dying to get more space to move around. Now that we have it, we don't know what to do with it. We do know, but we're still learning. It's incredible. I know stadiums are notorious for having weird live mixes, but it's the best sound we've had so far. It's exactly what we want our songs to sound like, which is big, lots of kick, lots of vocals, lots of electricity going on. It's been everything we've ever dreamed of. It's enhancing our playing and sound ten-fold."

The frontman was also asked whether CLASSLESS ACT had the opportunity to interact with the headliners — bands that are more than twice their age.

"The first day, Bret Michaels [POISON] greeted us with the warmest greeting," said Derek. "He gave us great advice on keeping our composure up there in case we feel lost. He kept saying over and over, 'If you need anything, please, come to my team or me. We'll take care of you.' The guitar and drum techs for MÖTLEY CRÜE have constantly been reminding us, 'If you need anything, let us know.' We've been treated like family. We've spoken to Joan for a moment and C.C. DeVille [POISON] in catering. We talked to these people; they're really sweet and have wished us good luck and complimented on our performance. We've bumped into Nikki Sixx [MÖTLEY CRÜE]. He's been nothing but really sweet and offered to help us out. It's been lovely talking to those people."

Day then offered his thoughts on the ongoing debate over whether rock and roll music is "dead," a quote attributed to KISS bassist Gene Simmons, who has long insisted that fans have "killed" rock music because of file-sharing and downloading.

"I come from Los Angeles," said Derek. "There are so many rock and roll bands. I always joke, 'The population of L.A. is about three million. Two-point-five million are in a rock and roll band.' [Laughs] Rock and roll isn't anywhere near dead. It's trying to come to the light. We're one of those bands who are fortunate enough and in the right place and time. But, if you think it's dead, it's a beautiful, zombified monster that is stronger than ever and can't be stopped."

The long-delayed "The Stadium Tour" was originally planned for 2020 and later moved to 2021 and then to 2022. The tour will conclude on September 9 in Las Vegas, Nevada.