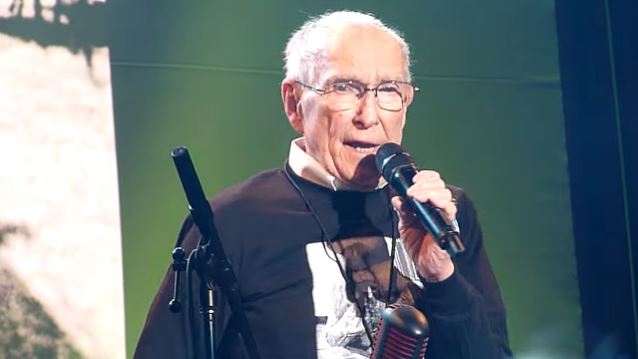 CLIFF BURTON's Father On His Son: He 'Knew His Talent But He Never Bragged About It'

On February 10, Rock 103 in Memphis, Tennessee honored late, great original METALLICA bassist Cliff Burton on his 53rd birthday with an exclusive interview with Cliff's father Ray Burton (pictured). The station continued Cliff's life celebration throughout the day with a Cliff 'Em All Two For Tuesday featuring the first three METALLICA albums Cliff played on — "Kill 'Em All", "Ride The Lightning" and "Master Of Puppets".

Guttery says: "As a bass player myself, Cliff Burton's influence is inevitable. There's no way to listen to those first three METALLICA albums and not be inspired by Cliff.

"What metal fan wouldn't snag up an opportunity to interview Cliff's dad?

"Ray might be 89 years [old], but he's as sharp as a razor and didn't hesitate for one minute to share some great Cliff stories.

"I'm honored to have had a little time with Ray. It makes me feel that much closer to Cliff's work."

In the interview, which can be streamed below, Ray Burton discusses his son's legacy and shares stories of Cliff's drive and determination at a very early age, crediting him with "having a plan early on." He explains: "Cliff knew his talent but he never bragged about it or gloated or anything. He just knew he could play bass that well."

Cliff Burton, best known as a heavy metal bass player who made use of distortion and special effects, was killed in an accident on September 27, 1986 at the age of 24, four years after joining METALLICA. It was Burton's early influence that helped create METALLICA's unique musical style for which the band has become famous.

Burton's huge talent and achievements were chronicled in book form with the 2009 global publication of "To Live Is To Die: The Life And Death Of Metallica's Cliff Burton", written by U.K.-based author Joel McIver and published by Jawbone Press. The foreword was provided by Cliff's close friend in METALLICA, Kirk Hammett.