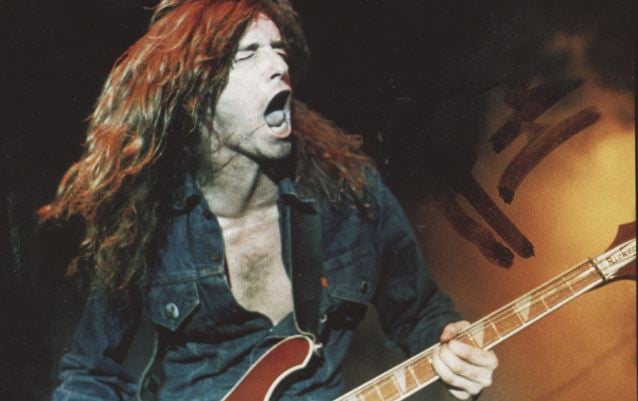 CLIFF BURTON's Father Reacts To Castro Valley Honor: 'He Would Have Had A Huge Smile On His Face'

Cliff Burton's father says that his son would have been thrilled about having February 10 proclaimed "Cliff Burton Day" by Alameda County supervisors. The late METALLICA bassist would have turned 56 years old on that date had he lived.

"I do not have a moment of doubt that, if Cliff were alive, he would have had a huge smile on his face about receiving this proclamation," Ray Burton said in a statement.

"February 10 has always been a very special day for me, and I am honored to now share this day with everyone in Castro Valley," he said.

METALLICA announced the proclamation on Twitter, writing, "It's official! The Board of Supervisors from Alameda County has just proclaimed February 10th, 2018, which would have been Cliff's 56th birthday, 'Cliff Burton Day.' Thanks to all of the fans who got behind this initiative. We love that he remains so revered."

The proclamation comes after metallica fans started a Change.org petition to recognize Burton in his hometown of Castro Valley.

Petition organizer Robert Souza asked the Castro Valley Municipal Advisory Council (MAC) to back his effort, and the Council voted 7-0 in favor of it. The issue then went to the Alameda County Board of Supervisors, who voted for it on Tuesday (February 6).

"It goes just beyond his tenure in METALLICA," Souza said at the Council's January 22 meeting.

"I know people who knew Cliff personally, and from what I've heard, he was a soft-spoken, polite gentlemen, which kind of contrasts with the bass player that he was; he was a ferocious, phenomenal bass player. In this day and age where there are so many issues that divide us and tear people apart, with people bickering and arguing, why not come together in Castro Valley with some pride of this phenomenal guy who's from our town?" he said.

Above photo of Cliff Burton by Harald Oimoen taken from the Bazillion Points photo book "Murder In The Front Row: Shots From The Bay Area Thrash Metal Epicenter", which can be ordered here.

IT’S OFFICIAL! The Board of Supervisors from Alameda County has just proclaimed February 10, 2018, which would have been Cliff’s 56th birthday, “Cliff Burton Day.” Thanks to all of the fans who got behind this initiative. We love that he remains so revered. pic.twitter.com/Qxy0yFptSS