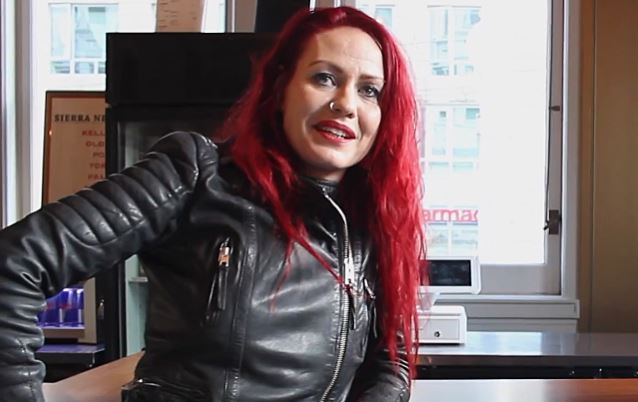 Music Junkie Press conducted an interview with COAL CHAMBER bassist Nadja Peulen before the band's March 8 concert at Regency Ballroom in San Francisco, California. You can now watch the chat below.

COAL CHAMBER's comeback album, "Rivals", will be released on May 19 North America via Napalm. The group's first CD in over thirteen years was recorded in part at Audiohammer studio in Sanford, Florida with producer Mark Lewis (DEVILDRIVER, CANNIBAL CORPSE).

Peulen returned to COAL CHAMBER in November 2013 following the departure of Canadian musician Chela Rhea Harper, who joined the band in late 2011 and toured with the group for nearly two years.

Peulen replaced Rayna Foss in 1999 during Rayna's pregnancy for almost 12 months while the band was on the road supporting its second album, "Chamber Music". Rayna came back to the band after her pregnancy leave and recorded COAL CHAMBER's third album, "Dark Days". Shortly after recording "Dark Days", Rayna quit the band and Nadja was recruited for the touring cycle that followed the CD's release. The band broke up during the "Dark Days" tour in 2002 and reunited nine years later.