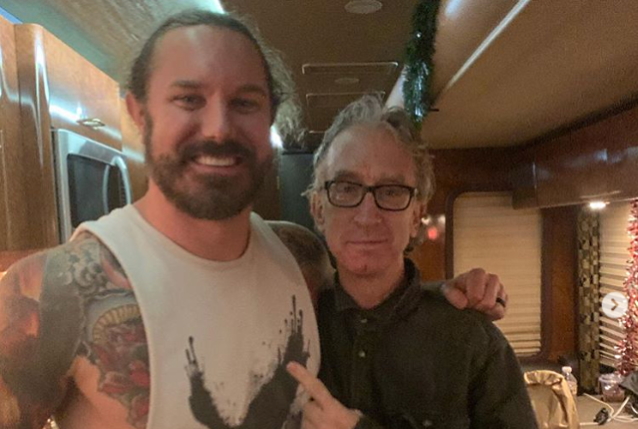 It is not clear if Dick is a fan of AS I LAY DYING's music or if he had other reasons for being at the show, but he ended up posting several photos of the occasion on his Instagram page, including one of him with AS I LAY DYING singer Tim Lambesis on what appears to be the band's tour bus. A separate picture shows Andy holding an "All Access" laminate for AS I LAY DYING's tour with EMMURE and AFTER THE BURIAL, which concludes tonight (Saturday, December 14) in San Diego.

Dickmade headlines this past week when he served only one day of a 14-day sentence for two charges — one for sexual battery and one for simple battery. The sentencing came after Dick, 53, failed to serve his court-mandated community service.

The reason for his release was reportedly due to overcrowding in the jail.

Last year, Dick was charged with misdemeanor sexual battery and misdemeanor simple battery for allegedly groping a woman who passed him on the streets of Los Angeles.

This past September, AS I LAY DYING released its seventh full-length album, "Shaped By Fire", via Nuclear Blast. The band has also been on the road consistently in support of the disc.