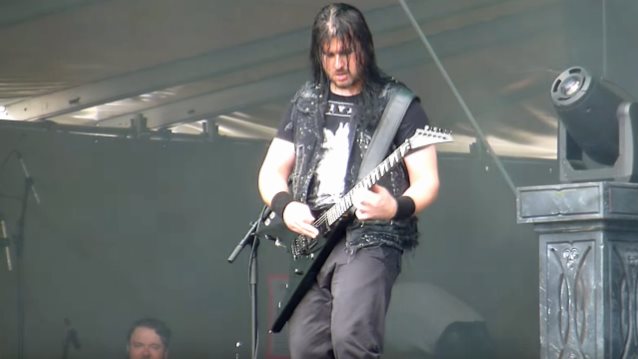 "Le Tour Du Metal" recently conducted an interview with guitarist Corey Beaulieu of Florida metallers TRIVIUM. You can now listen to the chat in the YouTube clip below. A couple of excerpts follow (transcribed by BLABBERMOUTH.NET).

Corey: "Well, ever since the first time, when we replaced Travis [Smith], everything's always been… The circumstances, when it comes down to it, we've never really had the best circumstances that... When something came up, it's always put us in a bind with either having to cancel a tour or cancel shows. And we didn't wanna do that. Nick [Augusto] came in — he was our tech at the time — and he came in and filled in for a little while. Then when that kind of reached its end, Mat [Madiro] was our drum tech. And he came in on tour, learned the set on a day off and started playing with us. And we kind of just kept it rolling 'cause we had so much touring. And instead of switching, or finding somebody to do the record that we were unfamiliar with and hadn't played with or anything like that, we just asked Mat to do the record. And then after we made the record, we had a lot of time off before we started touring, and we just wanted to take the time to really search around and get some options and talk to some different people. And eventually, after a while of talking to people and looking around, we finally got in contact with Paul [Wandtke] through mutual friends. The vibe seemed right, as far as the personality and just kind of the overall enthusiasm behind the opportunity to play in our band. So we jammed, and then we did a show. Knotfest in Mexico was kind of like the audition, and it's been going great. He definitely brings a musicianship. It really helps the overall band having someone behind us that's up to the same level, and it's been going really good. We've been able to go through the back catalog and play some stuff we haven't done in a long time, since we've always kind of had to play drummer catchup, getting people caught up on what we're currently playing and then never really got past learning stuff beyond that. So it's been a lot of fun for the rest of us that we don't have to play the same songs quite as often."

On what new TRIVIUM drummer Paul Wandtke adds to the band's sound:

Corey: "He's just a really versatile drummer; [he can] pretty much do anything. We've never worked on anything new yet with him, so it's definitely gonna be interesting to see. He plays all our old stuff perfect, so it'll be fun to hear what TRIVIUM sounds like when he's got creative control over what he's playing. So I think it's gonna really fun, 'cause he's definitely very creative behind the kit. He plays guitar, writes songs, so I think when it comes down to putting music together and writing drums for songs, I think you'll have a very musical output for the songs. It's gonna be nice to do some different-sounding, not so just kind of standard drum stuff. So [I'm] looking forward to hearing the vibe that he brings when we get in the studio."

TRIVIUM's "Silence In The Snow" album was released on October 2, 2015 via Roadrunner. The follow-up to 2013's "Vengeance Falls" was produced by Michael "Elvis" Baskette (SLASH, ALTER BRIDGE, THE AMITY AFFLICTION) and was mixed by Josh Wilbur (GOJIRA, LAMB OF GOD).