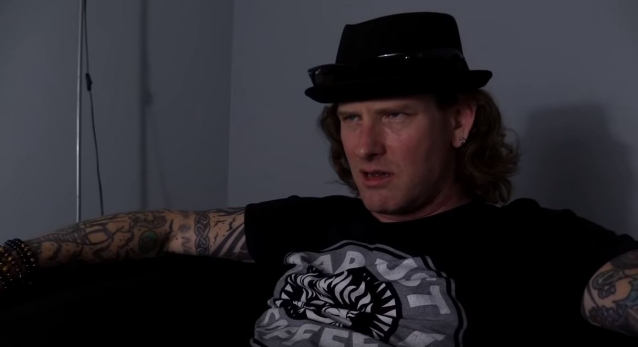 SLIPKNOT frontman Corey Taylor and his son Griffin star in parody of PINK FLOYD's film "The Wall" as part of the web review series "Nostalgia Critic". The long-running online series of comedic reviews takes a look at the 1982 British live-action/animated musical drama film, which was directed by Alan Parker with animated segments by Gerald Scarfe and is based on the 1979 PINK FLOYD album of the same name.

"Nostalgia Critic" features clips from the original film, as well as scenes poking fun at the storyline.

Taylor recently confirmed that he will start work on his debut solo album for a tentative 2021 release. He told told SiriusXM's "Trunk Nation" that the disc will feature a wide variety of sounds and styles. "I'm gonna dabble in a little bit of everything," he said. "It'll have everything that I'm known for and more, let's put it that way.

"The thing that I've always loved is when I go out and do those solo cover shows, basically, is that people are always surprised by the songs that I pull out of my ass to play," he continued. "And that's kind of what this album will be — basically, me writing all of the styles that maybe I haven't gotten to do with SLIPKNOT and STONE SOUR and just going for it, just rolling the dice and being, like, 'You know what? I'm gonna put my money where my mouth is and just what fucking happens."

According to Taylor, the LP will feature guest appearances by a number of well-known musicians from other groups. "I'm gonna have a core band that goes in, but I'm definitely gonna have a bunch of my friends come in and do some stuff," he said. "It's gonna be really cool, man. I'm actually really, really looking forward to it."

Corey and the rest of SLIPKNOT are continuing to tour in support of their latest album, "We Are Not Your Kind", which came out last month.