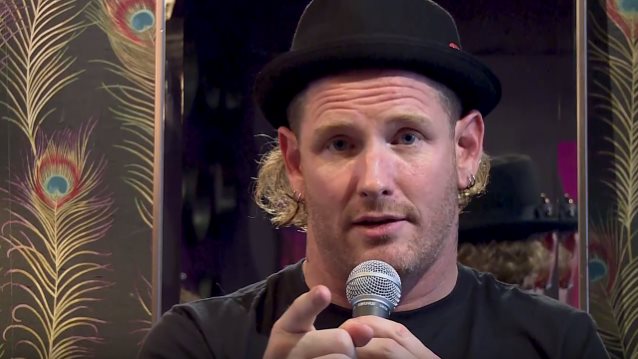 HardDrive Radio recently conducted an interview with SLIPKNOT and STONE SOUR frontman Corey Taylor. You can now watch the chat below.

Asked what he would say to those people who insist that we shoud give President Donald Trump a chance, Taylor said: "I would say he's had a chance for the last two hundred days now. We're in day two hundred of the Trump presidency. It's ridiculous. Never mind the fact that the Republicans hold House, hold Senate, they now have the deciding factor in the Supreme Court, and they have the presidency, and they still can't get anything done. So… how much of a chance do you really think he needs? Never mind the fact that everything that comes out of his mouth feels like a poison pill: encouraging police brutality, encouraging a travel ban, encouraging some sort of wall that no one in their right mind is gonna pay for.

"Is everybody sick of winning yet? Are you tired of winning?" he continued. "I'm sorry.

"This is me trying not to be a dick. I empathize. I understand — you want someone who you can see yourself in. But he is so full of shit, he's gonna paint himself to look exactly like he wants you to see him."

Taylor added: "There's none of him in you and vice versa, and he is leading you down a path to make you feel like an idiot. And I'm sorry, and I'm trying to get people to come together and start talking to each other instead of looking to firebrands for answers that are never gonna be there."

Corey also talked about the passage in his new book, "America 51", where he discusses how the world at large views American tourists: self-entitled, oblivious to matters outside of the U.S., with little desire to learn of different cultures or languages.

"We are dicks," he said. "Just the sense of self-importance that comes off us in waves, it's kind of hard to deal with. It makes me avoid American tourists as well. I tend to stick to myself anyway, but when I see a family or a group of businessmen. Oh, they're the worst — they wander in like they own the place, and they leave like they just shit on it. And everything has to deal with not only their entrance and their subsequent terrorizing of everything, but then when they walk out, now, because you're American, you have to deal with the consequences of their actions, man, and it's embarrassing. There's no reason for us to do that. It's like we leave the confines of our country and forget morals, forget manners, we forget how to be good to each other, we forget the fact that, oh, we happen to be in another country — maybe they don't speak English. Not everywhere's Canada, okay? Sorry."

"America 51" was released on August 8 via Da Capo Press. The book, which is subtitled "A Probe Into The Realities That Are Hiding Inside 'The Greatest Country In The World'", was described by its publisher as a reflection of how touring with bands has taught Corey "what it means to be an American in an increasingly unstable world." It features Taylor's thoughts on the state of the U.S. and had to be rewritten after Donald Trump was elected president last November.