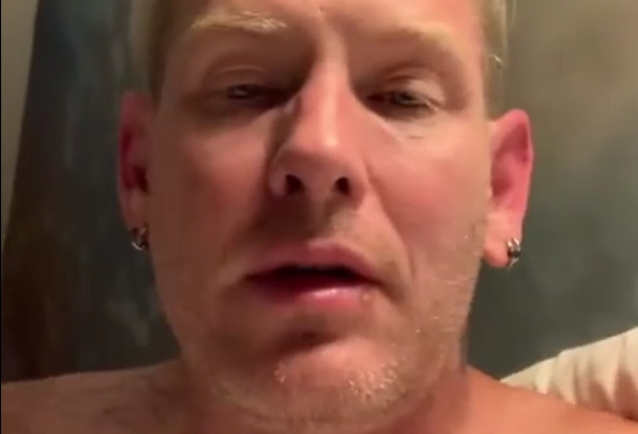 Corey Taylor believes that he was infected with the coronavirus by one of the fans that came to see him perform on his recent solo tour.

The 47-year-old SLIPKNOT and STONE SOUR singer, who is fully vaccinated, was forced to call off his appearance at a Michigan pop culture convention a week ago after testing positive for the coronavirus. Taylor first shared the news in a video posted on August 20 on the Facebook page for Astronomicon, the event where he was scheduled to appear last weekend.

Taylor, who spent the last few days quarantining at a Denver hotel after his diagnosis, discussed his COVID-19 battle while chatting with fans virtually as part of this year's GalaxyCon.

Speaking about how he contracted the virus, Corey said: "It's crazy, man. You go in… I try to keep my mask up the entire time. You try to trust that people are vaccinated or they're masking up and social distancing and at least testing negative before they go to something like that. And sometimes you just run into those selfish people that don't care about that. I think that's what happened to me — somebody came to one of my shows and was in the audience sick and probably got several people sick, man."

Taylor previously told Consequence Of Sound that he had no patience for people who knowingly expose others to the virus.

This past Thursday (August 26),Corey's wife Alicia Taylor, took to her Twitter to say that Corey had been "testing negative for two days. Had he not been vaxxed, this would have lasted much longer and been exponentially worse," she added.

Last Monday, Corey offered an update on his condition in a video shared on social media. At the time, he said he was still positive, but no longer grappling with COVID symptoms like aches and a high fever. "It shouldn't be too much longer before I test negative, so that's great," Taylor said." Like his wife, he credited the COVID-19 vaccine with helping him fight the virus, and encouraged people to get it if they haven't. "I also want to say, because I was vaccinated, I truly believe that is what helped me get over the brink," he said. "This is the worst I've ever been sick in my life. Had I not been vaccinated, I shudder to think how bad it would've been. But because I had that extra little bit of protection, it definitely helped me get through it. So go, go, go. If you're still on the fence, I'm telling you right now, it's the best thing you can do for yourself."

Taylor completed the latest leg of his solo tour in support of his 2020 album "CMFT" on August 19 in Denver.