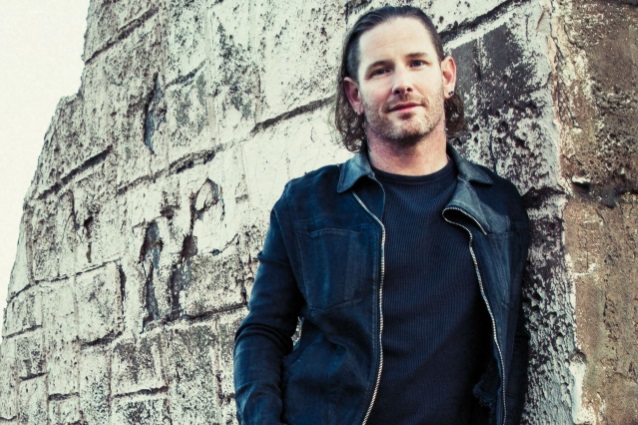 SLIPKNOT and STONE SOUR vocalist Corey Taylor told The Pulse Of Radio that he and his new girlfriend recently vacationed in Bora Bora, and he admitted it was the best break he'd had in years. "It felt good to be able to just kind of unwind," he said. "I'd never really been able to do that before. But I got to go with my girlfriend, and we had the most amazing time. I finally realized that you have to be happy to be able to enjoy yourself, and I definitely was, so I think I'm gonna try this whole vacation thing a little more often."

Taylor recently started speaking openly about his relationship with Alicia Dove, a professional dancer and a member of the all-girl dance group CHERRY BOMBS. Taylor revealed last December that he had been separated from his second wife for almost a year and had recently started a new relationship, but was at first hesitant to say who he was dating.

But Wednesday night (May 9) on Instagram, Taylor posted a photo of Dove and wrote: "She is the reason I'm happy after being lost for so long. She is a million things... and that one thing. She is my everything. And I'm so proud to be hers. The Blood in my Love. My Queen. Mi Rojo Mundo."

Dove responded by uploading an Instagram picture of Taylor, writing: "He is my King. My best friend. My World. He's the man who has shown me a love I never thought was possible. His energy is warm, his heart is as big as the sun, and every single day I get to walk this earth by his side is a gift. I live to see his smile, and his laugh is my favorite sound. Corey, I love you more than life itself."

Corey and his now-estranged wife Stephanie Luby were married in November 2009 in Las Vegas inside the Palms hotel's Pearl concert theater.

Taylor divorced Scarlett — whom he married on March 11, 2004 in a small ceremony at the Botanical center in Des Moines, Iowa — in early 2007.

COREY TAYLOR REFUSES TO BELIEVE SOCKS CAN GO ON EITHER FOOT. CONVINCES THE BRAND “NO NONSENSE” TO PUT A TINY L AND R ON EACH ONE FOR HIM. NEXT STONE SOUR ALBUM TO BE NAMED NO NONSENSE AS A THANK YOU. https://t.co/Zy2pBMTG2l

We’re making the dumbest headlines we can think of. 🤷🏻‍♀️ Care to join? https://t.co/FhGzlNDxrI

And, with that, @BLABBERMOUTHNET has officially jumped the shark... https://t.co/RqoRN32xJs