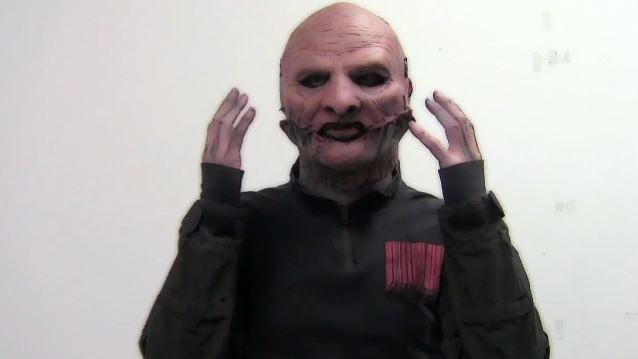 Barbara Caserta of Linea Rock and Radio Lombardia recently conducted an interview with SLIPKNOT singer Corey Taylor. You can now watch the chat below. A couple of excerpts follow (transcribed by BLABBERMOUTH.NET).

Corey: "I think there's something about us that appeals to a lot of different people, because we don't sugarcoat anything. We present reality the way it is, but we also try to put that positivity in. There's hope in our music. We're not just doom and gloom. It's about picking people up off the ground and saying, 'It can be all right. You just have to let yourself know that.' And for me, there's so many different people in the world who just want to weigh people down with too much of that reality, whereas we are trying to free people's minds and say, 'Look, this reality is only real if you want it to be. You can change anything you want. There's always going to be darkness in the world, but if you fight that darkness with light, maybe we can find some place that's better for all of us.'"

On whether SLIPKNOT will ever embark on an "unmasked" tour:

Corey: "No. I don't think you'll ever see a SLIPKNOT 'unmasked' tour. Everybody asks me that, and it's such a part of what we do, and it helps us really embrace the music that we make. I couldn't see that happening. And to everyone who thinks that [the masks are] just a gimmick, live in it and you tell me it's a gimmick, you shitheads."

SLIPKNOT has unveiled the details of a massive summer headlining tour dubbed "Summer's Last Stand". The trek kicks off on July 24 in West Palm Beach, Florida, wrapping up six weeks later on September 5 in Dallas, Texas. Joining SLIPKNOT on the road trip will be LAMB OF GOD, BULLET FOR MY VALENTINE and MOTIONLESS IN WHITE.

The summer jaunt follows a brief spring run that SLIPKNOT will launch on April 25 at the Fort Rock festival in Fort Myers, Florida, ending on May 16 in Grand Rapids, Michigan.

SLIPKNOT's 2014 album, ".5: The Gray Chapter", sold around 132,000 copies in the United States in its first week of release to land at position No. 1 on The Billboard 200 chart. The CD arrived in stores on October 21 via Roadrunner.