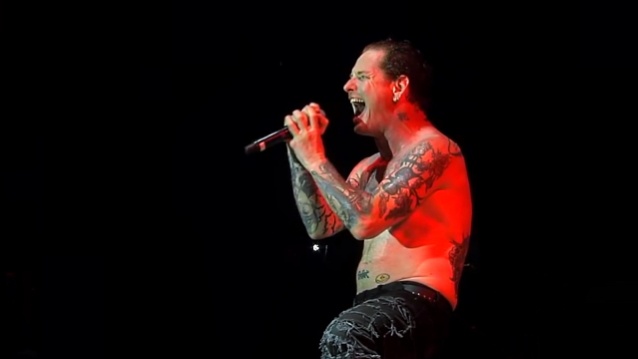 In a brand new interview with "The Mistress Carrie Podcast", SLIPKNOT and STONE SOUR frontman Corey Taylor spoke about his inability to perfom any live shows during the coronavirus pandemic. He said (hear audio below): "It sucks because on one side I feel like I'm shackled because a lot of the promoters won't book anything — they won't book anything that could be looked at as a risk. Plus, state to state, city to city, the regulations are different — you don't know what the hell is going on. And even if you get past all of that, there's no guarantee that anybody's gonna show up. It all depends on what concert you're talking about. But at the same time, I look at the ['Black Lives Matter'] protests and I see people who are so passionate about what they believe in that they are willing to put themselves at risk. If that's one end of the spectrum, who's to say to say that the other end of the spectrum is if you put on a show and people are just as passionate about having a good time as they are about protesting something that they absolutely believe in, then I feel like one and the other have to kind of go… At some point, someone's going to have to break the lock. I don't know who that's going to be, I don't know what it's going to take. All I know is I'm gagging to play a live show — I'm losing my mind. And I haven't felt like that in a very, very long time."

Taylor went on to say that he is "trying to find a way to play some solo shows" in his hometown of Las Vegas. "I don't know how I'm gonna do it, but I'm trying," he said. "So if we can come out of that and be okay, I think we'll be able to move on. But it's like trying to get through red tape… If you find a venue that's willing to do it, then you have to find out if the city's actually going to let you do it or if they're gonna send somebody down to shut you down. And if they don't do it, can you get a promoter that will actually invest in it or are they gonna take their hands off it? So it's almost like trying to chase the source to find the cure. And I don't know what right move's going to be right now. But I'm trying to find it. I'm trying to do a million different things right now, but I'm definitely trying to find it."

Taylor recently completed work on his debut solo album for a tentative September release. Corey recorded the effort with his solo band, consisting of Jason Christopher on bass, Dustin Schoenhofer on drums, with Zach Throne and STONE SOUR's Christian Martucci on guitar.

Taylor described the disc to Knotfest.com's "Mosh Talks With Beez" as "something I was planning to do anyway next year... but I figured if this was the time to do it, why not try and do it. Me and my band quarantined. We social distanced for about two weeks, including our producer, Jay Ruston, who I worked with, and the people at the studio that I recorded at."

The singer said that the material ranged from a song he wrote in high school to tunes he composed during the last SLIPKNOT tour, explaining: "It's just stuff that I've kind of had floating around that didn't really fit with either band. It just had different energy and a different vibe."

He continued: "It's everything I wanted it to be. There's some SLADE in there, there's some Johnny Cash, there's some ALICE IN CHAINS. I mean, big choruses, fun rock, just huge solos... The way I've been looking at it is it's like a futuristic throwback. Everything on this album is a hybrid of all these different genres that I'm really into."

The vocalist says he recorded 25 songs for his solo effort, including 13 originals, six covers and acoustic versions of six of the originals.