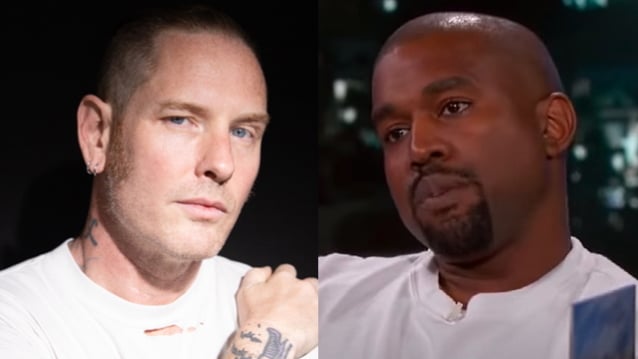 COREY TAYLOR Is Worried About KANYE WEST: 'I Just Hope That He Gets The Help That He Needs'

Corey Taylor has offered some surprising words of support to Kanye West, whose behavior in recent weeks has been increasingly erratic, including divulging deeply personal details about his family and marriage.

Last month, West announced that he was running for president, and he delivered a lengthy monologue at a campaign event, during which he told the crowd he and his wife, Kim Kardashian, considered having an abortion when she was pregnant with their oldest daughter. The 43-year-old rapper then went on multiple Twitter tirades, alleging that Kardashian and her mom Kris Jenner had tried to "lock him up," and claiming that he had been considering divorcing his wife.

Taylor, who made headlines in 2015 when he slammed West for claiming to be "the greatest living rock star on the planet," was asked about Kanye's latest outburst during a recent interview with "Loudwire Nights".

The SLIPKNOT and STONE SOUR singer said (hear audio below): "Obviously, people know that I've had my issues with Kanye for a long time. But I'm watching this now very closely.

"I remember when he first announced [that he was running for president] in that weird rant that he did on MTV when he was given a 'Thanks For Showing Up' award [in 2015]. When he first announced it then, I laughed, but then seeing this behavior that is happening right now, that worries me. That's not the normal behavior of someone who is… That seems like someone who's having a mental break, to be honest. It sounds like someone who is borderline. I don't wanna say it's a borderline personality disorder, but it almost feels bipolar. When you exacerbate it with fame and money and all of these different things, people have a right to be concerned. He's got a family; he's got people who care about him and worry about him.

"It's one thing to laugh about it from afar; it's another thing to watch a breakdown happening in real time, especially with someone who is loved by so many people, and a lot of his actions are taken very seriously," Taylor added. "So when he says some of that shit, people take him seriously. It's like [President Donald] Trump — people take what he says very seriously, and that's a danger. So we have to be very, very careful and watch what's being said.

"I just hope that he gets the help that he needs, let's put it that way."

Last month, Kardashian issued a lengthy statement on Instagram defending West, explaining that he has bipolar disorder, a lifelong mental health condition that causes extreme mood swings that include emotional highs and lows.

In a recent interview with Forbes, Kanye addressed his mental health, saying, "You know I was out there, ended up in the hospital, people were calling me crazy. I'm not crazy."

Two years ago, West told The New York Times that he was diagnosed with bipolar disorder in 2017.