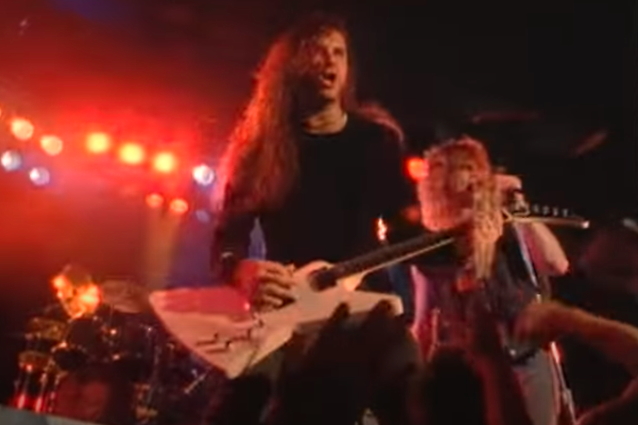 Former OVERKILL and current VIO-LENCE guitarist Bobby Gustafson was a guest on a recent episode of EXODUS frontman Steve "Zetro" Souza's YouTube show, "Zetro's Toxic Vault". During the chat, which can be seen in two parts below, Souza brought up the fact that Gustafson's visual appearance toward the end of his time with OVERKILL closely resembled that of METALLICA frontman James Hetfield. (Gustafson was accused by some METALLICA fans of ripping off Hetfield's stage moves and wristbands, as well as "jacking" the white Gibson Explorer in OVERKILL's 1989 video for the song "Elimination".)

Gustafson said: "I was the better-looking one. That's all I've gotta say…" When Souza asked Gustafson if Hetfield "stole" his look, Bobby said: "Well, not all of it… He's actually the one who recommended the guitar. I got it from Gibson. They gave me a white V, white Explorer. I still play 'em — love 'em to death. But sometimes you can do something first, but you don't reach as many people as someone who hits a million people. So they think he did it first sometimes, and you're just still underground."

When Souza pointed to Gustafson's "armbands" as another similarity between him and Hetfield, Bobby said: "That was the MISFITS. The other guys in the band, we were wearing that stuff for years."

Bobby also talked about his experience auditioning for METALLICA as Hetfleld's temporary replacement (on guitar only) while James recovered from being burned onstage back in 1992. He said: "They had called me. Tony called me, their road manager at the time. [He] gave me the entire setlist to learn in two days. I had, like, 18 songs. But I knew bits and pieces of METALLICA; I couldn't get my way through an entire song. That's just not what I did — I didn't learn other people's stuff. So they probably thought I knew it. I did the last show — which I should have canceled — but I did the last show with I4NI, and they were flying me out to Denver to audition. And I said, 'Well, I can't learn all these songs. What am I gonna do?' So I tried to learn the changes off the vocals. I said, 'Let me get really into the vocals and I'll get all the changes in.' I was supposed to leave Newark airport. There was a downpour for, like, 10 minutes, and it delayed my flight for, like, four hours, so I wasn't getting into Denver till really late. And James was still in pain then, so he didn't wait — he left. So they canceled it for the night and we went the next day. I'm, like, 'Oh, great. I've get some time to work on the stuff.' But then the next day he didn't even show up. And then they auditioned on five songs. So I'm, like, 'Why didn't they just tell me the five songs? I could have spent a lot of time learning them instead of spreading it out.' So he wasn't there the next day. It was just me, Kirk [Hammett] and Lars [Ulrich] and Jason [Newsted]."

John Marshall, METAL CHURCH guitarist and onetime METALLICA roadie, who had already filled in before when James broke his arm skateboarding, eventually landed the gig.

"John, I think, they kind of knew would be the back-up plan if nobody else worked out," Bobby said. "I think Pepper [Keenan, CORROSION OF CONFORMITY] auditioned. I know Mike [Gilbert] from FLOTSAM [AND JETSAM] was there at the same time I was; he tried out too. And there may have been a couple of others — just a handful. They kept it tight, 'cause they had to get it done and get back out on the road.