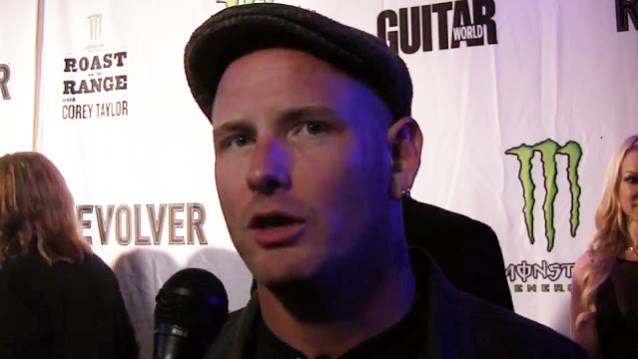 SLIPKNOT singer Corey Taylor says fans "will lose their minds" when they hear the band's long-awaited new studio album, tentatively due before the end of the year via Roadrunner Records.

Speaking to Kristyn Clark of Pop Culture Madness on the red carpet of last week's "Monster Energy Roast On The Range With Corey Taylor" event in Columbus, Ohio, Corey said about his plans for the rest of 2014: "The rest of the summer is just finishing up a certain album [referring to SLIPKNOT's new CD]. And that's about it, really. I've got a handful of shows that I'm doing with STONE SOUR in July, and then everything is SLIPKNOT."

Pressed about the direction of the new SLIPKNOT material, Taylor said: "I will say that, at the moment, right now, it feels like a great mesh of [2001's] 'Iowa' and [2004's] 'Vol. 3: (The Subliminal Verses)'. You've got the gorgeous melodies and the artistic direction of 'Vol. 3' and then you've got the absolute brutality of 'Iowa'. And I think people are gonna lose their minds when they hear it."

Taylor said in an interview with Front Row Live Entertainment on May 12 that the band's first album in six years is "coming along," adding, "I actually left the studio to come right down here. So it's a matter of time, trust me. It's gonna be rad . . . Everything is going exactly how it needs to go. So it's gonna be really awesome."

The new SLIPKNOT album will be the band's first since the 2010 death of bassist Paul Gray and the late 2013 dismissal of drummer Joey Jordison.